Justin Bieber And Selena Gomez Spotted Together In Calabasas 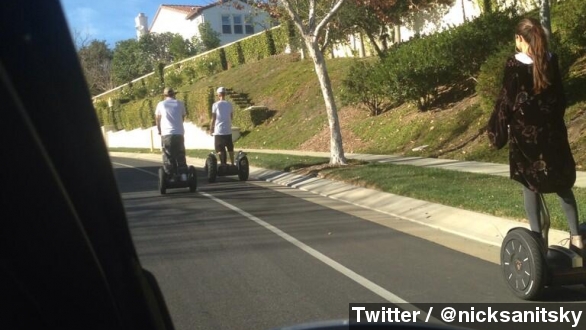 SMS
Justin Bieber And Selena Gomez Spotted Together In Calabasas

Is a reunion in the cards for Justin Bieber and Selena Gomez?

The former flames were spotted together Thursday cruising on Segways through Bieber's neighborhood in Calabasas, California. (Via American Music Awards)

Lucky for us, a passerby snapped some pics of the on-again-off-again couple during their ride and posted them on Twitter. TMZ first broke the story.

According to the Twitter user, Gomez was as sweet as can be, while the Biebs, in typical fashion, wasn't too friendly.

@nicksanitsky went on to say Bieber, "told us to f*** off, and his bodyguards blocked the road... Gotta admit, I was kinda starstruck by @selenagomez but @justinbieber ruined the moment." (Via Twitter / @nicksanitsky)

Bieber and Gomez reportedly started dating in 2010 — and since then, they've broken up and gotten back together several times. But they seemed to call it quits for good back in 2012. (Via Hollywood Life)

The reunion comes just a few weeks after Bieber revealed during an interview he still has feelings for Gomez. (Via Island Def Jam Music Group / Justin Bieber)

"I wrote the best music once my heart was broken. But you know, she's a great woman. I love her till this day." (Via Power 106 FM)

Bieber also admitted he and Gomez weren't on speaking terms at the time, but it looks like that might have changed. The two are reportedly taking breaks from their respective music careers in early 2014 — maybe to spend time with each other?