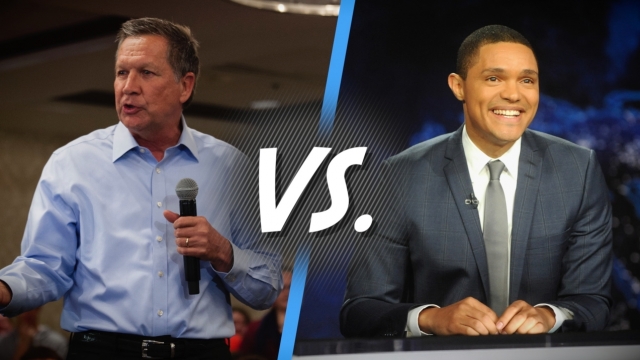 By Eugene Daniels
March 31, 2016
The presidential candidate threw a little bit of shade at Trevor Noah, and Noah clapped back. But Kasich's critique isn't an unpopular opinion.
SHOW TRANSCRIPT

So far, Ohio Gov. John Kasich has managed to stay above the fray during the GOP primary. Until now.

"You know what Donald ought to be happy about? That Jon Stewart isn't running 'The Daily Show,'" Kasich said on "Good Morning America" Thursday.

OK, so he's basically still above the fray, but Kasich did throw a little shade at Stewart's replacement, Trevor Noah. And like any self-respecting comedian, Noah couldn't let it pass.

He hit back on Twitter, saying, "Yes, how lucky for Trump. Though not as lucky as getting to run against John Kasich. #SinceYouMentionedIt."

Ouch. So Noah probably got the last word in this little saga, but Kasich might not be the only one missing the days of Stewart.

Most of those critics agree Noah's commentary on the most chaotic political season in recent memory isn't as incisive as his predecessor's.

A Variety critic was a bit more pointed, saying, "One of Noah’s main problems is that he treats his opening news round-up as if it were a stand-up set at a comedy club. ... Noah’s routine is merely a string of middling, even groan-worthy jokes tied together with nothing more substantial than the host’s dimpled grin."

According to Variety, ratings are down 30 percent from a year ago. But that could have less to do with Noah himself and more about the loss of Stewart. To be fair, Noah's been on the air for less than a year.

And Comedy Central is definitely on Noah's side. The channel's president told The Wrap she likes the different personality Noah brings to the show, adding, "He doesn’t necessarily bring the anger and the weariness of some other late-night personalities right now when talking about politics. He brings this really curious millennial perspective that wants to understand it."

This video includes images from Getty Images and clips from Comedy Central.