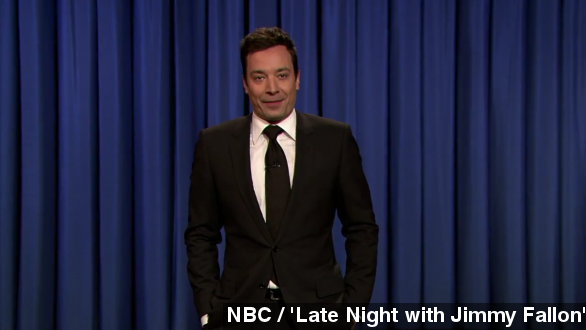 After five years and 969 episodes, Fallon is moving on take Jay Leno's place as host of "The Tonight Show." (Via The Verge)

And, fittingly, his last show focused on looking back past episodes of Fallon's show, looking forward to his new position — and trying not to get too choked up.

"You are perfect for this job."

But his guests wouldn't let him stay down in the dumps for long.

After grilling Fallon with an "intense" interview about trying sushi and the meaning of time, Andy Samberg had just one message for the host. (Via NBC)

"You gotta pull it together, man." ​(Via NBC / "Late Night with Jimmy Fallon")

He also got some good luck messages from a few celebrities on how to handle his new job, including from Miley Cyrus.

"You get a lot more ratings if you wear less clothes." (Via ​NBC / "Late Night with Jimmy Fallon")

Ha. Ha Miley. But hey, she does know from experience.

Fallon closed his final show with a duet with The Muppets. Zap2it called the performance, "A really lovely and absurd musical moment that highlighted just what so many love about what the host has done with 'Late Night' in his tenure."

And just like that, Fallon walked off the stage and across the hall to the "Tonight" show studio to greet his new cast and crew on the other side. Fallon will officially take over the show Feb. 17.