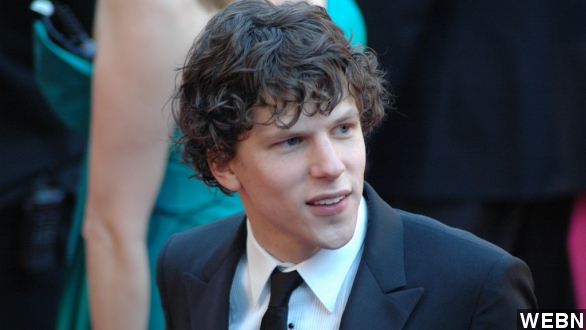 Comic book geeks, get ready for a younger, slicker and … hairier Lex Luthor in the next Superman movie.

Eisenberg's first major part was playing Mark Zuckerberg in "The Social Network," a look at the creation of Facebook, and he even collected an Oscar nomination for the role.

Director Zack Snyder was excited about the new Luthor, saying: "He's a complicated and sophisticated character … able to challenge the incredible might of Superman. Having Jesse in the role allows us to explore that interesting dynamic." (Via Los Angeles Times)

But how would the hardcore fans react? Twitter buzzed with some negative reaction, but most praised the out-of-the-blue casting, comparing Luthor to Eisenberg's pompous and controlling turn as Zuckerberg.

NPR's Linda Holmes wrote: "Maybe they'll shave Eisenberg's head. Maybe they won't. But Luthor isn't about the baldness; he's about the attitude and the ominous power."

It's a far cry from the previous Luthor rumors — whispers that "Breaking Bad" star Bryan Cranston could fill the part almost set the Internet ablaze last year. (Via Screen Rant)

In a twist, Total Film interviewed Eisenberg and his then-director about the Superman-Batman movie back in October, but the future supervillain stayed conspicuously silent. Did he know something?

RICHARD AYOADE: "Is there any word on the villains yet?"

TOTAL FILM: "Probably would be Lex Luthor, they haven't announced it yet."

Joining Eisenberg will be Ben Affleck as Batman, another controversial choice, but we'll have to wait until 2016 for all to become clear.