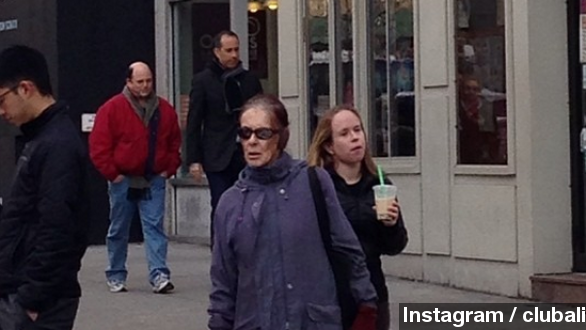 By Danny Matteson
January 14, 2014
Seinfeld and Alexander were spotted at Tom's Restaurant, which served as the exterior of the Monk's Cafe on "Seinfeld."
SHOW TRANSCRIPT

What is the deal with that picture?

That’s the question on the minds of many a Seinfeld fan after Jerry Seinfeld and Jason Alexander — AKA, well, Jerry Seinfeld and George Constanza — were photographed walking into Tom’s Restaurant in New York on Monday. (Via Instagram / clubali)

For those who were fans of the show about nothing, you’ll recognize that restaurant as the exterior of the diner known as "Monk’s" on the show, the same one Jerry, George, Elaine and Kramer frequented while commiserating about their lives — or ordering big salads. (Via TMZ, NBC / "Seinfeld")

So what were they doing there?

Well, according to Gothamist, they were definitely filming something. Along with a few pictures showing what appears to be film equipment, the site reports:

“Tom's is indeed closed for a few hours and there are cables running into the restaurant, which has its shades down. Also, there are cameras inside—so something is being filmed!” (Via Gothamist)

To add to the intrigue, Seinfeld co-creator and "Curb Your Enthusiasm" star Larry David was later spotted walking out of the same diner. (Via Vimeo / Gothamist)

And Jason Alexander tweeted Monday evening: “hey everybody, you'll never guess what I did today. Shhhhh. It's a secret.” (Via Twitter / @IJasonAlexander)

That secret is surely the long-awaited Seinfeld reunion, right? Well, not so fast.

Others have guessed at a Super Bowl Commercial or perhaps a "Seinfeld" movie.

Or maybe it’s what Jerry was referring to here. During a Reddit AMA earlier this month he mentioned a script he co-wrote with Larry David, saying “I can't reveal what it is at this time. All I can do is tell you is that it's big, huge, gigantic.”

That “gigantic” project could be a Broadway play written by the comedy team and possibly starring Seinfeld. David confirmed he had written a play to Showbiz411, adding Jerry's starring was a “maybe.”

No other members of the Seinfeld cast were spotted on location this time, but if the mystery has got you all worked up, just remember this mantra.