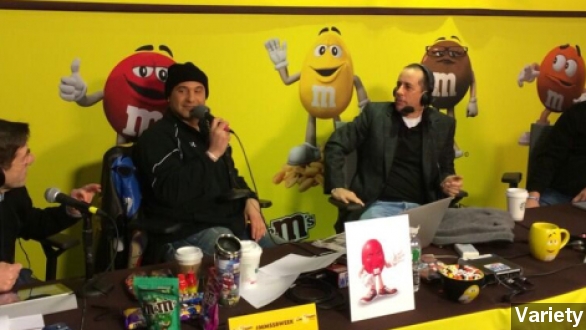 By Danny Matteson
January 30, 2014
Seinfeld said a “secret project” has been filmed and the public will get a look at it "very, very, soon."
SHOW TRANSCRIPT

Yes, Seinfeld fans, it’s real and it just might be spectacular. On a radio show Thursday, Jerry Seinfeld confirmed that some sort of “Seinfeld” reunion is, in fact, happening.

On WFAN’s “Boomer and Carton Show," Jerry said a “secret project” starring him as well as other former cast members has been filmed, and the public will get a look at it, quote “very, very soon.” ​(Via WCBS)

But Seinfeld was less than forthcoming on what exactly it's going to be, though. Take a look.

Host: “It’s neither a Super Bowl commercial, which is one rumor …

Host: “… and it’s not ‘Comedians in Cars Getting Coffee.’”

Seinfeld: “But it is not, not those things either.” (Via WFAN)

Sounds like a lot of yada, yada, yada. Jerry, the star of the legendary show about nothing, played coy most of the interview, but the hosts did manage to pry a few details out of him.

Including that it's already filmed, Jason Alexander will reprise his role as George Costanza, it's longer than 60 seconds, and Seinfeld co-creator and “Curb Your Enthusiasm” star Larry David is involved. (Via TBS)

Rumors of a possible reunion began swirling earlier this month when, as this picture from Gothamist shows, Jerry and Jason Alexander were spotted entering Tom’s Restaurant in New York while filming was clearly going on.

Larry David, the show’s co-creator and Jerry’s writing partner on the show, was later seen exiting the same diner. (Via Vimeo / Gothamist)

If you’re a fan, you might recall Tom’s was used as the exterior shot of the diner known as “Monk’s Cafe” on the show — one of Jerry, George, Elaine and Kramer’s favorite hangouts. (Via NBC / "Seinfeld")

Jerry also mentioned a quote “ big, huge, gigantic” project he was working on with Larry David during a Reddit AMA earlier this month — though he didn’t divulge any details.

Whatever it is, Seinfeld noted it will be a “shortish” project, and will definitely be quote “one and done.” So sorry, “Seinfeld” fans. No reboot for you.