Jenna And Barbara Bush Give Advice To Malia And Sasha Obama 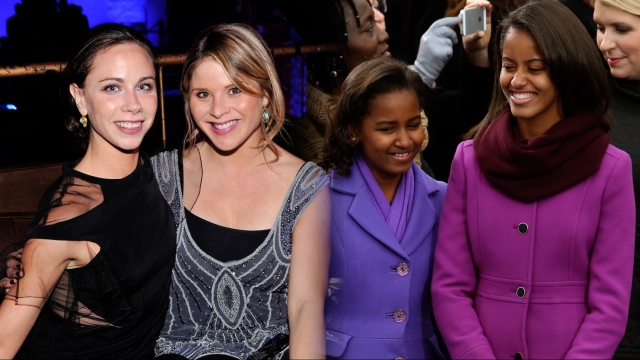 By Katherine Biek
January 13, 2017
In a new letter, the Bush twins let Sasha and Malia Obama know they "have much to look forward to" after leaving the White House.
SHOW TRANSCRIPT

In a letter published in Time on Thursday, Jenna and Barbara reflected on meeting the Obama girls eight years ago after their father had been elected president: "The four of us wandered the majestic halls of the house you had no choice but to move in to. When you slid down the banister of the solarium, just as we had done as 8-year-olds and again as 20-year-olds chasing our youth, your joy and laughter were contagious."

The letter went on to summarize ways Malia and Sasha have grown throughout their eight years at the White House. "You attended state dinners, hiked in national parks, met international leaders and managed to laugh at your dad's jokes during the annual Thanksgiving turkey pardon, all while being kids, attending school and making friends."

But now as the Obama girls prepare to start a new chapter, Barbara and Jenna are encouraging them to stay in touch with White House staff members and Secret Service agents, and keep their friends and family close.

Barbara and Jenna even poked fun at themselves, writing, "Enjoy college. As most of the world knows, we did."

The letter was actually the second one the Bush twins have written to the Obama girls. They previously wrote one in 2009 when President Barack Obama took office, and read it on NBC's "Today" show. It provided a list of things Malia and Sasha should do while on their new journey, including having pool parties and playing sardines on the White House lawn.

The Bush sisters concluded their most recent letter by reminding Malia and Sasha that they'll always be there for them: "You stood by as your precious parents were reduced to headlines. Your parents, who put you first and who not only showed you but gave you the world. As always, they will be rooting for you as you begin your next chapter. And so will we."