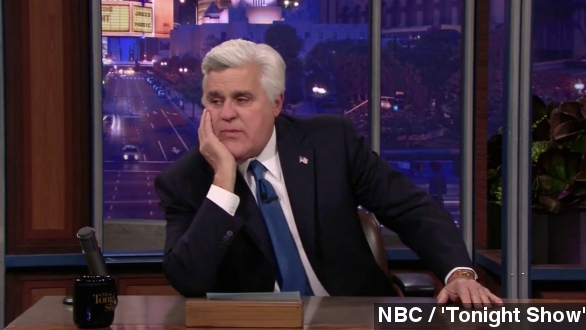 By Lauren Zima
February 7, 2014
The longtime late-night host teared up during a goodbye that was appropriate and emotional.
SHOW TRANSCRIPT

​"I want to thank you -- the audience. You folks have been just incredibly loyal. ... This has been the greatest 22 years of my life."

Leno got teary several times in those last moments — he talked about how the "Tonight Show" crew had been like his family, especially after he lost his father, mother and brother within his first few years as host.

He also quoted his predecessor, Johnny Carson, saying "I bid you all a heartfelt goodnight."

And the goodbye was star-studded, with an admittedly strange cast of celebs — Carol Burnett, Jack Black, Kim Kardashian and more dropped by to say goodbye. (Via Zap2it)

And then the show rolled right into a new episode of "Late Night" with Leno's replacement, Jimmy Fallon.

Leno said he is excited for Fallon, and that "it really is" time to go. Of course, Leno infamously left "The Tonight Show" once already, in 2009 when Conan O'Brien took over. (Via The Hollywood Reporter)

And O'Brien added a bit of a slight into his monologue Thursday night over on TBS.

"NBC has the Olympics. It's a big deal. NBC will finally get to show somebody who's OK with passing the torch."

But not everyone was lamenting over the past. Even Jimmy Kimmel sent out a heartfelt Tweet over Leno's departure, putting "issues aside."

And Newsday says Leno left in the right way — "He spoke from a heart we've only rarely seen glimpses of over these years..."

Despite any drama over when Leno would leave the show, there's no doubt that he left his mark. He's considered one of the greats, leading the ratings over the years.

And he went out that way too — on top. (Via Deadline)