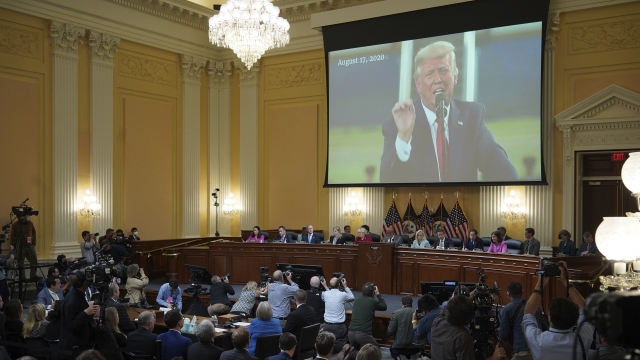 The committee investigating the Capitol insurrection is taking another step to place blame for the attack squarely on former President Trump.

"He betrayed the trust of the American people. He ignored the will of the voters. He lied to his supporters and the country," House Committee Chairman Rep. Bennie Thompson said.

The committee accused the former president of inciting the riot, saying he and his advisers bolstered an election fraud conspiracy theory despite knowing it was categorically false. And they used members of Trump's own team to prove it.

"There was an avalanche of all these allegations of fraud that built up over a number of days," Former U.S. Attorney General Bill Barr said. "And it was like playing whack-a-mole because something would come out one day and then the next day it would be another issue."

In recorded testimony, Stepien explained how the president's lawyer, Rudy Giuliani, urged Trump to declare victory on election night. Despite warnings from Stepien and another adviser, Trump went with advice from a visibly intoxicated Giuliani.

Even the president's own daughter, Ivanka Trump, agreed.

"I don't know that I had a firm view as to what he should say in that circumstance," she said. "The results were still being counted. It was becoming clear that the race would not be called on election night."

And so did his son-in-law, Jared Kushner, who was a former White House Senior Adviser.

INTERVIEWER: Did you ever share, Mr. Kushner, your view of Mr. Giuliani, ever share your perspective about him with the president?

INTERVIEWER: Tell me what you said.

KUSHNER: Basically, "Not the approach I would take if I was you."

Trump was consistently told he lost. And his allegations of fraud were bogus. Barr was calling fraud claims from the Trump legal team "crazy," "silly" and "idiotic" — using even stronger language.

"I told him that the stuff his people were shoveling out was [expletive], that the claims of fraud were [expletive]," Barr said. "And he was indignant about that."

Some of the most outrageous claims, according to Barr, were those regarding dominion voting machines being rigged against the former president. Barr said Trump was becoming "detached from reality."

"I specifically raised the Dominion voting machine, which I found to be among the most disturbing allegations," he said. "Disturbing in the sense that I found zero basis for the allegations."

The House committee accuses Trump of misleading his own supporters. They say his campaign raised $250 million for an official "election defense fund."

Members of the House committee say there's enough evidence for the attorney general to indict Trump.

"The rule of law needs to apply equally to everyone," Rep. Adam Schiff said. "And there are certain actions, parts of these different lines of effort to overturn the election, that I don't see evidence the Justice Department is investigating."

Just how likely is it that DOJ will act is unclear. In the meantime, U.S. Attorney General Merrick Garland says he's watching the hearings closely.

"We are proceeding with full urgency, with respect — as I've said many times before — to hold all perpetrators who are criminally responsible for January 6 accountable, regardless of their level or their position and regardless of whether they were present at the events of January 6. We're just going to follow the facts wherever they lead," he said.