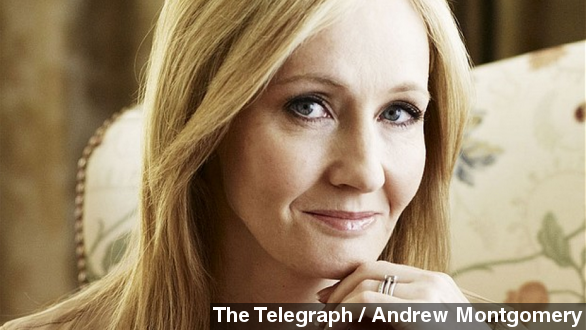 By 2014, we hope we're not giving away any Harry Potter spoilers when we tell you Ron and Hermione end up together at the end of the ridiculously popular series. But now, author J.K. Rowling is dropping a bombshell on us... admitting that pairing the two together may have been a mistake.

In a special interview with Emma Watson, who portrayed Hermione in the films, Rowling says she wrote the Ron / Hermione relationship as a "form of fulfillment." (Via Warner Bros.)

The interview won't be published until Thursday, when it will appear in the entertainment magazine Wanderland; however, in excerpts of it released by The Sunday Times, Rowling told Watson:

"For reasons that have very little to do with literature and far more to do with me clinging to the plot as I first imagined it, Hermione ended up with Ron."

She goes on to say distance has given her perspective on the issue. It's been about seven years since the release of the last Harry Potter book, and she says she's sorry if she's "breaking people's hearts." (Via WDIV)

Watson didn't seem so shocked apparently, responding: "I think there are fans out there who know that too and who wonder whether Ron would have really been able to make her happy." (Via movies.ie)

While that revelation alone has sent shockwaves through the wizarding world, here's the real kicker: The Sunday Times also hints that Rowling admits she should've had Harry wed Hermione.

Dozens of media outlets have run the with idea, claiming Rowling said Harry and Hermione should have ended up together. (Via CNN, Entertainment Weekly, The Telegraph)

However, Mugglenet.com, which bills itself as the number one Harry Potter fan site, notes Rowling is not actually quoted in any of the excerpts as specifically saying that — adding we should be careful about jumping to conclusions before the full interview has been released.

No matter Rowling's take on the Harry / Hermione situation, the author's quotes make it clear she's had second thoughts about pairing Hermione with Ron. Actually, it's been a pretty tough time for Harry's ginger-haired best friend since the book series and films came to an end.

Two years ago, Rowling admitted to Daniel Radcliffe that she considered offing the character altogether.

We won't know Rowling's true intentions until the full interview is published Feb. 7.