It's Not Nessie, But Jurassic Predator Found In Scotland 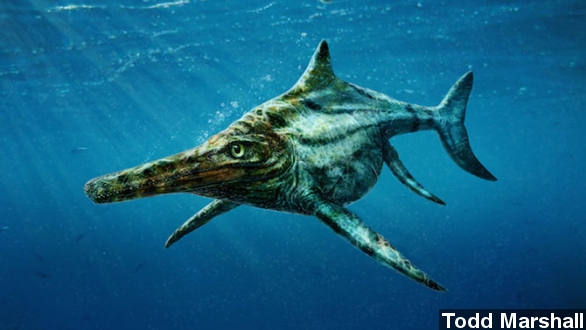 SMS
It's Not Nessie, But Jurassic Predator Found In Scotland

By Danny Matteson
January 12, 2015
The reptilian creature is believed to have made its home in Scotland some 170 million years ago.
SHOW TRANSCRIPT

A giant, ancient, aquatic predator trolling the waters of Scotland — hmm, why does that sound familiar?

According to HowStuffWorks: "The Loch Ness is one of Scotland's largest, deepest, lakes. … According to monster hunters, the loch is home a creature known as Nessie."

No, we're not talking about the legendary Nessie here but a new reptilian creature believed to have made its home in Scotland some 170 million years ago. (Video via National Geographic)

The new — and presumably extinct — creature is being called Dearcmhara shawcrossi. That strangely pronounced title is Scottish-Gaelic for "marine lizard" with the last name of the amateur collector who found the fossils tacked on to the end.

It's believed to have been about 14 feet long, and according to Discovery News, kind of looked like a "sinister dolphin."

We can't really disagree with that. It was also believed to have very little to fear in its area during the Jurassic period.

According to the study's lead author, "Top-of-the-food-chain animal. Ate fish. Filling those roles that things like whales fill in the oceans today."

Originally discovered on Scotland's Isle of Skye in the late 1950s, the handful of fossils were initially donated to the Hunterian Museum in Glasgow — and only recently were identified.

As The Telegraph notes, the creature is believed to be a an Ichthyosaur, an extinct group of aquatic reptiles.

The research identifying it was published in the Scottish Journal of Geology.