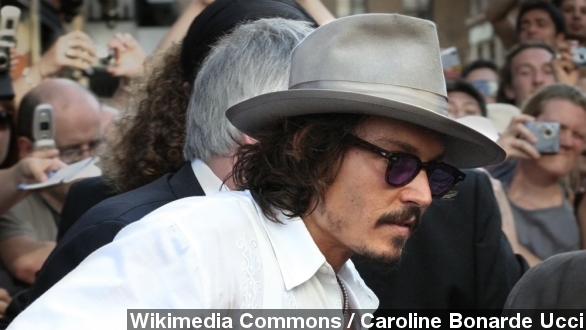 Well, if some photos of Heard with a huge ring on her left hand snapped by a paparazzo are any indication, he very well could have. (Via TBS / "Conan," ABC / "Jimmy Kimmel Live")

Heard and a female pal were spotted at a restaurant in Los Angeles Tuesday night. And as they left, the 27-year-old actress put on quite a show to keep her ring finger covered. (Via Daily Mail)

But that didn't stop an eagle-eyed cameraman from getting a photo of what looks like a diamond ring as she raised her left hand to her forehead. (Via E!)

As you can see, the news is making headlines, but reps for both Heard and Depp have yet to confirm if wedding bells are in the near future for the couple.

The two met on the set of "The Rum Diary" in 2011 but didn't start dating until 2012, when Depp's 14-year-long relationship with Vanessa Paradis ended. (Via GK Films / "The Rum Diary," People)

And before 27-year-old Heard got involved with 50-year-old Depp, she dated photographer Tasya van Ree for about four years. (Via New York Daily News)

When asked about why she went from dating a woman to seeing a man, Heard told Flare magazine she didn't understand why anyone cared. (Via Vanity Fair)

"Maybe you like blondes now, but maybe you'll be into a brunette in the future. I just don't understand this idea that we have to choose one or the other." (Via Flare)

If the engagement rumors are true, this would be the first marriage for Heard and the second for Depp. Depp has two children with Paradis, and was also once engaged to Winona Ryder.