Is 'Divergent' The New 'Hunger Games'? 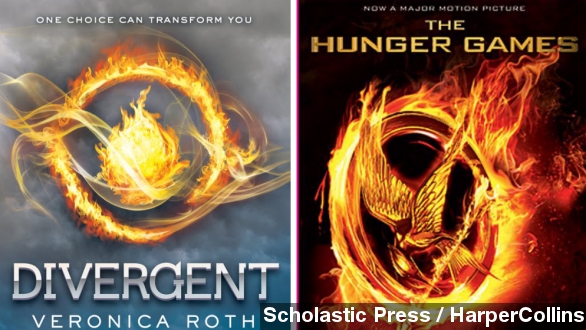 One of the most anticipated films of the year is the dystopian young adult film "Divergent."

Last night on "Jimmy Kimmel Live," the stars of the film, Theo James and Shailene Woodley, revealed the final trailer for the film to resounding squeals of excitement from teens and the media. (Via ABC, Summit Entertainment / "Divergent")

Since the debut, media outlets have been overcome with excitement, writing headlines such as, "'Divergent' Trailer Is Dauntlessly Cool: Watch It Now!" ​and "The Final Divergent Trailer Will Make You Jump With Excitement." (Via Buzzfeed)

But we were thinking, doesn't Chicago in "Divergent" seem an awful lot like Panem in "The Hunger Games?"

When writing about the new trailer, MTV acknowledged the strong similarities in the two films, playing to the now-famous catchphrase.

Vulture also points out the similarities in its article. That includes the dystopian society, sorting ceremony, stubborn teen heroine and even the blazing fire seal on both covers.

But one Forbes writer argues it's not the storyline that makes people compare the two but rather the lack of other female lead franchises. "I ... hope we're in a position a few years down the line where we have enough female-centric genre franchises that we don't feel the need to compare them to each other."