Is Brazil Ready To Host The World Cup? 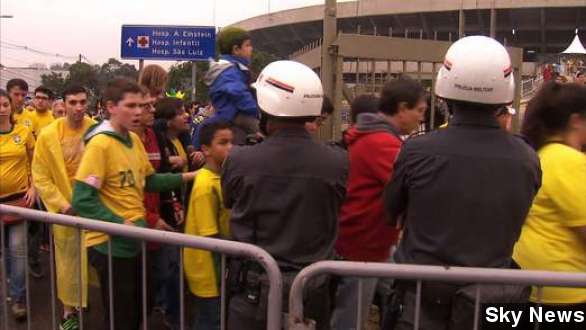 SMS
Is Brazil Ready To Host The World Cup?
By John O'Connor
By John O'Connor
June 7, 2014
As kick off for World Cup approaches, host nation Brazil continues to see demonstrations that threaten to disrupt the extremely popular tournament.
SHOW TRANSCRIPT

We're now less than a week away from the World Cup. But as the tournament approaches, host nation Brazil continues to see demonstrations that threaten to disrupt the world's most popular sporting event.

Subway workers in Sao Paulo went on strike Thursday and Friday, bringing the city to a halt. In footage soccer's governing body FIFA would rather the world not see, police in Brazil fired tear gas and stun grenades at protesters. Three of the city's five lines were disrupted, adding to congestion on the city's already busy roads and making travel difficult for those seeing Brazil's last warm-up match before the big tournament. (Via BBC, Sky News)

The subway strike, just one of many anti-government demonstrations that have dogged Brazil in the run-up to the World Cup, is expected to continue through the weekend. (Via Euronews)

There has been criticism about Brazil's $11.5 billion spending in preparation for the tournament and questions about whether the country will be ready for kickoff.

If the government can't close a deal with the subway workers' union, or force their hand with a labor court ruling, the result could spell chaos for the host nation as travel would become difficult, if not impossible, for the Cup's spectators. (Via CNN)

But major demonstrations ahead of a World Cup isn't a problem unique to Brazil.

Construction and transportation workers in South Africa leveraged the 2010 World Cup for better wages and other concessions from authorities. Despite those strikes, and other criticisms about stadium and infrastructure delays similar to what Brazil is seeing this year, that tournament went on without any major setbacks. (Via NDTV, FIFA)

While protesters in Brazil denounce World Cup spending as excessive, The Wall Street Journal cites a report that shows overall spending as making up a relatively small portion of the Brazilian economy's overall planned infrastructure spending.

"According to Moody’s Investors Service ... The roughly $11.5 billion in spending on transportation projects, stadiums and other Cup-related projects represents just 0.7% of planned investment in Brazil between 2010 to 2014. ... even if some local governments’ World Cup spending runs over budget by 100%, they’ll still stay within their 2014 revenues."

The World Cup kicks off June 12 with the host nation set to take on Croatia in Sao Paulo.