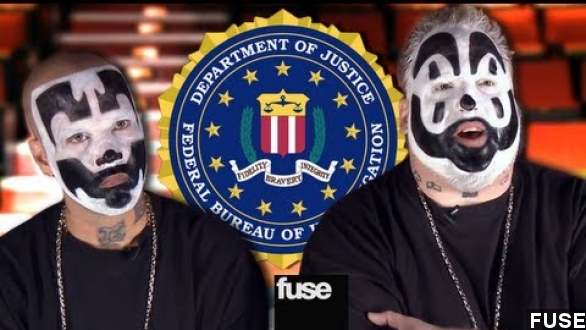 By Jasmine Bailey
January 8, 2014
The rap duo filed a lawsuit against the FBI and the U.S. Justice Department for categorizing fans, or "juggalos," as gang members.
SHOW TRANSCRIPT

Rap group Insane Clown Posse filed a lawsuit against the FBI and Justice Department Wednesday for causing discrimination against its fans.

"The duo is upset that the FBI has classified its fans as quote 'gang members.' ICP fans are known as juggalos, and the group says they're more like a family, not a gang." (Via WXYZ)

The New York Times reports the group, along with the American Civil Liberties Union, claims the government made an "'unwarranted and unlawful decision' to classify fans of the band as criminal gang members, leading to their harassment by law enforcement and causing them 'significant harm.'"

"In 2011, the FBI included juggalos in a national report on gangs. Attorneys for Insane Clown Posse filed a lawsuit seeking documents to explain how the FBI made that designation." (Via WJBK)

That 2011 report states: "Most crimes committed by Juggalos are sporadic, disorganized, [and] individualistic. ... Disorganization and lack of structure within their groups ... makes it difficult to classify them and identify their members. ... [Many] are comprised of transient or homeless individuals." (Via FBI)

Although there have been a number of incidents involving juggalo members in the past, last year at the 14th annual Gathering of the Juggalos​, FUSE talked to fans who defended themselves against the gang allegations. (Via Las Vegas Sun, National Report)

"They don't understand us, so they don't know what to make, and they just have to put some kind of cap on it."

The defendants in the case have until March to respond or request that the case be dismissed. Insane Clown Posse has admitted it will not be easy to fight the FBI in court.