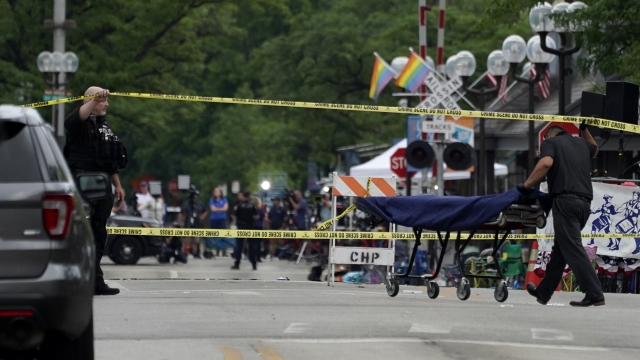 SMS
Amid Mass Shooting in Highland Park, Gun Violence in Chicago
By Cat Sandoval
By Cat Sandoval
July 5, 2022
Much of Illinois' gun violence can be linked to weapons coming in from neighboring states with weaker gun laws and restrictions.

After the July 4 mass shooting in Highland Park, a suburb a few miles north of Chicago, Chicago Mayor Lori Lightfoot offered to help. On Twitter, she said, "we grieve with the families of the deceased and injured. Law enforcement is working hard to bring the shooter into custody."

The city of Chicago is all too familiar with gun violence. That same July 4 weekend police saw more than 60 people shot in the city.

That weekend's tally included a woman killed in a popular tourist spot — Chicago's Chinatown, in what local media called a shootout near a karaoke bar.

The Chicago Police Department tells Newsy over the holiday weekend there were: 51 shooting incidents, 68 shooting victims, and 8 murders due to gun violence.

Illinois Governor J.B. Pritzker described the situation facing his state and the country.

"I'm furious that children and their families have been traumatized. I'm furious that this is happening in communities all across Illinois and America. I'm furious because it does not have to be this way and yet we as a nation, well, we continue to allow this to happen," he said.

Illinois has gun laws that experts consider some of the toughest in the country. It received a grade of an A- by Gifford's Law Center to Prevent Gun Violence with universal background checks, gun-owner licensing, and a minimum age for buying weapons. Even red flag gun laws, where firearms can be confiscated should the owner be deemed dangerous against themselves or others.

But the center says much of Illinois' gun violence can be linked to weapons coming in from neighboring states with weaker gun laws and restrictions. Last year, the center saw nearly 800 homicides in Chicago, the city sued a Gary, Indiana gunshop claiming firearms are ending up in criminal's hands and being brought across the state line.

"Keeping you safe is my priority. Not one of. But I wake every morning with this as my first concern and I push everybody to step up and do more," Mayor Lightfoot said.