Impeachment Inquiry: Who Is Jennifer Williams? 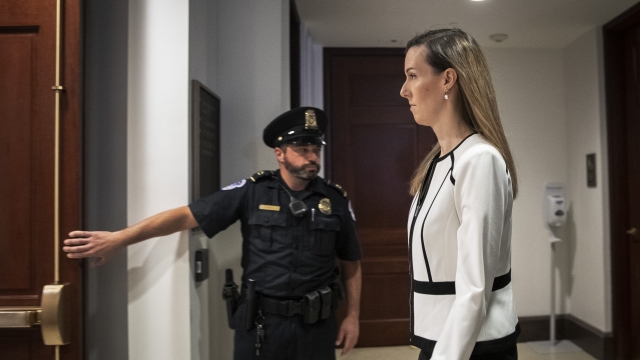 SMS
Impeachment Inquiry: Who Is Jennifer Williams?
By Alec Larson
By Alec Larson
November 17, 2019
​Williams, a longtime State Department employee, was assigned to work on European and Russian issues with the vice president's team in the spring.
SHOW TRANSCRIPT

Jennifer Williams, a senior adviser to Vice President Mike Pence, is scheduled to testify on Tuesday as part of the ongoing House impeachment inquiry into President Donald Trump.

Williams, a longtime State Department employee, was assigned to work on European and Russian issues with the vice president's team in the spring.

She was one of two Pence aides who listened in on the July 25th phone call between President Trump and Ukrainian President Volodymyr Zelenskyy that has become the focus of the probe.

Earlier this month, the House subpoenaed Williams to testify in a closed door hearing.

CNN reports that sources familiar with her testimony said Williams thought the call between the leaders was unusual. Williams reportedly said she thought the conversation didn't have the usual tone of a diplomatic call, but ended up choosing not to raise her concerns with superiors.

Williams also accompanied Pence to Warsaw in September for a meeting with Zelenskyy, during which the two discussed the $400 million in stalled security aid.

When asked by lawmakers what Pence knows, Williams reportedly said that she hadn't heard him discuss anything involving investigations of the 2016 election or the energy company that hired Hunter Biden onto its board. She also said she made note of the July call and the transcript in her nightly notes, but that she didn't know if Pence had read the transcript.

Williams is one of eight witnesses who are scheduled to testify during the second week of public impeachment hearings.