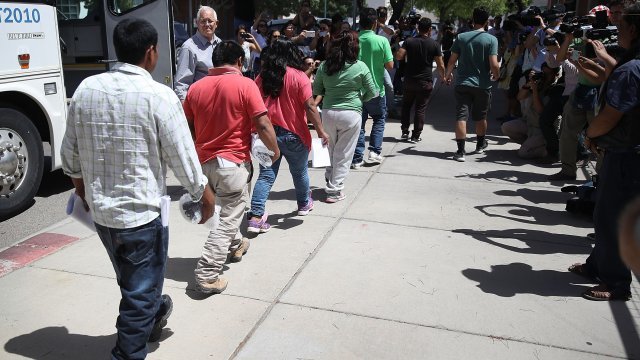 By Katherine Biek
December 27, 2018
A local non-profit group director told CBS News it's prepared to coordinate local assistance for as many as 500 people that could be dropped off.
SHOW TRANSCRIPT

The director of a local non-profit group told CBS News it's prepared to coordinate local assistance for as many as 500 people that could be dropped off.

It's reportedly pretty common for ICE to release migrants to shelters when it's own processing centers are too full. But just since Sunday, federal agents have released more than 1,000 asylum-seekers in El Paso and surrounding areas.

Now, local organizations told multiple outlets that ICE normally notifies them beforehand about upcoming drop-offs. But that didn't happen Sunday night and volunteers had to scramble to find places to house more than 200 men, women and children that were released at a Greyhound bus terminal with no notice. The migrants were eventually given shelter in schools and hotels.

In a statement to news outlets earlier this week, ICE said it was "redoubling its efforts" to work with local officials and partners. But it also acknowledged that it's restricted by a court settlement that limits the number of days the government can hold migrant children in custody.