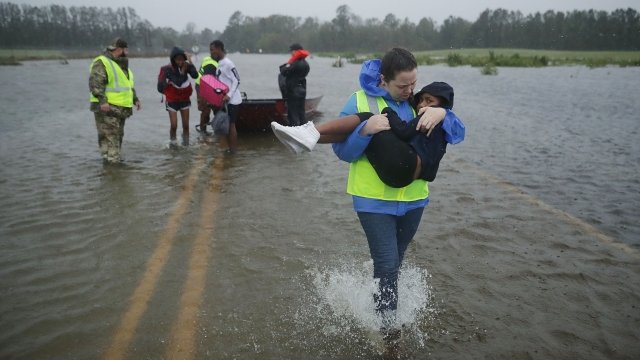 "We do want to emphasize that this is only the beginning," said Chris Wamsley of the National Weather Service.

Hurricane Florence made landfall just east of Wilmington, North Carolina, Friday morning, and it could continue to wreak havoc on the coastline for 24 to 36 hours.

Forecasters predict the center of the storm could come to a near standstill over North and South Carolina.

Though the hurricane was downgraded to a Category 1, officials warn it's still dangerous. They expect its slow pace and storm surge will prompt what could be hours of "significant threat" from "extremely dangerous flooding."

Hurricane warnings and storm surge warnings were in effect Friday for some parts of the coast. The National Weather Service has already reported a storm surge of 10 feet above normal level in North Carolina.

As of Friday, the storm cut power to hundreds of thousands of customers in North and South Carolina, emergency officials said.

More than a million people were ordered to evacuate, but some decided to stick it out. Hundreds have been rescued from the rising waters, and hundreds more are waiting for help.

Hurricane Florence is the first major Atlantic hurricane of the 2018 season.