Hurricane Florence Weakened As It Approaches The Carolinas 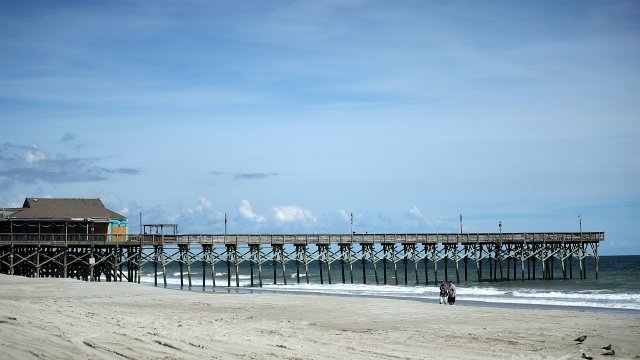 SMS
Hurricane Florence Weakened As It Approaches The Carolinas

By Katherine Biek
September 13, 2018
The storm is expected to make landfall somewhere over the Carolinas Thursday or Friday.
SHOW TRANSCRIPT

Forecasters say Hurricane Florence is still a dangerous storm, despite its winds weakening as it moves closer to the U.S. East Coast.

Florence was downgraded to a Category 2 storm late Wednesday. It's maximum sustained wind speeds were still measuring more than 100 mph as of early Thursday.

The storm is expected to make landfall somewhere over the Carolinas Thursday or Friday.

The National Hurricane Center warned Thursday that Florence will still bring an increased risk of life-threatening storm surge, catastrophic flash flooding and dangerous winds to those states and the surrounding region.

In preparation for the storm, officials in five states and Washington, D.C. have all declared states of emergency.