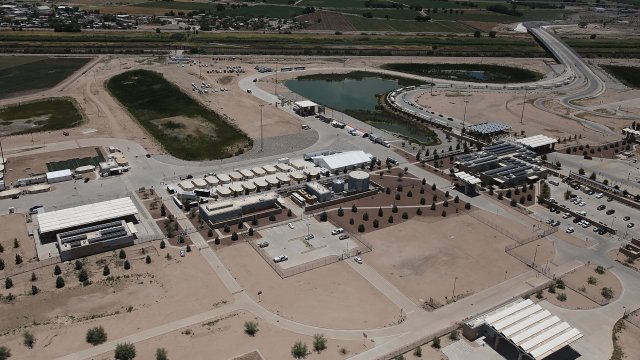 By Katie Cammarata
October 2, 2018
The detained migrant children are being moved from overflowing foster homes and shelters.
SHOW TRANSCRIPT

Hundreds of detained migrant children are being transferred from overflowing foster homes and shelters to a temporary tent facility in Tornillo, Texas.

The New York Times reports so far, more than 1,600 migrants kids who came into the U.S. from Central America illegally and alone have been moved.

Traditionally, detained migrant kids are housed in shelters across the U.S. But with the increasing number of kids coming into the country illegally, those shelters are now overflowing. So the Trump administration has to move them somewhere else.

It's opting to move kids who have been in the U.S. longer, rather than new arrivals. That's because the government wants to limit the amount of time the migrant kids spend at the Tornillo tent facility, since the conditions aren't the best and those kids are much closer to being placed with sponsors than kids who just came to the U.S.

Critics say the children could still have to live at the temporary facility for months, without school and with limited legal services.

Last month, a Health and Human Services spokesman told media outlets the Tornillo tent facility was set to stay open through the end of the year and would be expanded to hold some 3,800 beds.

He said the expansion was based on the number of migrant children illegally crossing the border alone. He also made a point to say family separations at the border ended on June 20 and weren't driving the need.