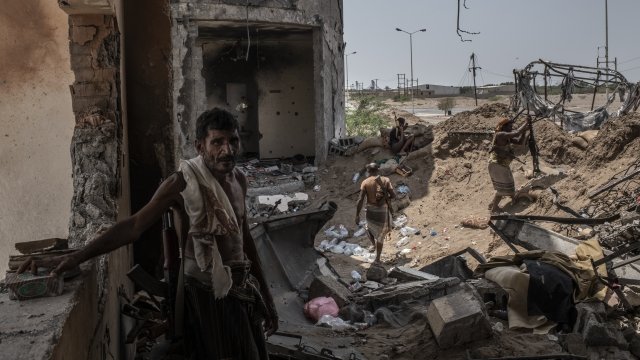 By Caitlin Baldwin
November 26, 2018
The groups are urging the U.S. to end support for the war in Yemen.
SHOW TRANSCRIPT

A number of humanitarian groups are calling on the U.S. to end support for a Saudi Arabia-led coalition war in Yemen.

The CEOs of Save the Children, International Rescue Committee, Oxfam America, CARE US and the Norwegian Refugee Council USA said in a joint statement that 14 million people are at risk of starvation in Yemen if the U.S. does not act.

The letter says, "Starvation must not be used as a weapon of war against Yemeni civilians."

The humanitarian groups ask the U.S. to "immediately cease hostilities, reopen all of Yemen's ports, facilitate access to people in need for humanitarian staff and supplies, and take basic measures to stabilize the Yemeni economy, including payment of civil servant salaries."

The U.N. has labeled the war in Yemen "the world's worst humanitarian crisis." It says three-quarters of the population is in need of humanitarian aid and protection.

And calls for the U.S. to stop supporting Saudi Arabia have grown since the death of journalist Jamal Khashoggi.