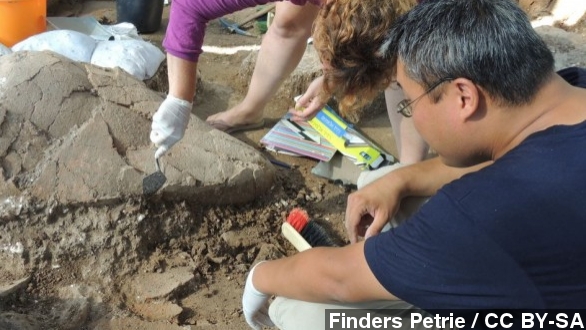 We now have an idea of what biblical kings' taste in wine was like, thanks to a recent archeological dig.

An international research team found a huge wine cellar under an ancient Canaanite palace. They found 40 large jugs that still have traces of wine in them.

This is the largest and oldest personal wine cellar in the Middle East. If all those jars were full, the cellar would have been able to hold 3,000 bottles of wine.

The team found herbs, berries, and honey in the wine traces. Researchers called the beverage a "relatively sophisticated drink."

The palace has been excavated since the 80s, but the cellar was just recently found.

It is located in modern day Israel and spans 200 acres. When the palace was in tact, a Canaanite community occupied the area and it likely housed some sort of leader.

Archeologist Andrew Koh told The Smithsonian, ​"This was the patriarch's personal wine cellar. The wine was not meant to be given away as part of a system of providing for the community. It was for his own enjoyment and the support of his authority."

A Pennsylvania Museum article notes elaborate wine vessels were a symbol of status and power during this time.

Although we don't really think of Israel as a wine country anymore...

The Huffington Post reports the Canaanite wine was sought after throughout the Mediterranean and in Egypt during ancient times.

And it turns out we might be able to sample the ancient wine someday. Researchers are currently trying to replicate some of the recipes to see what they taste like.

This video includes images from Getty Images, Plos ONE, and Wikimedia Commons.