How The Media Will Change The Washington Redskins' Name 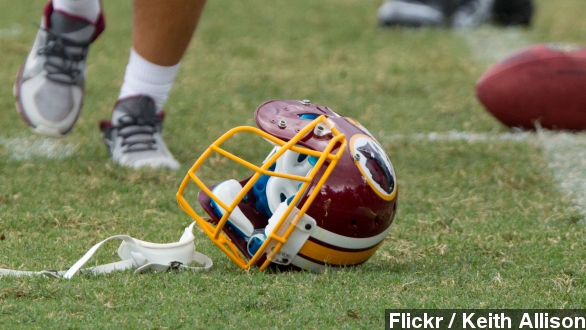 SMS
How The Media Will Change The Washington Redskins' Name

By Matt Moreno
June 25, 2014
Not content to wait for Daniel Snyder to change the name, several media outlets are choosing to come up with new ways to refer to the team.
SHOW TRANSCRIPT

There's plenty of talk over whether or not the Washington Redskins should, in fact, still be called the Redskins. Some say it's racist, but team owner Daniel Snyder disagrees and has vowed to keep the name forever. (Via ESPN | Bloomberg | HLN | CBS)

HARRY REID: "Daniel Snyder may be the last person in the world to realize this, but it's just a matter of time until he's forced to do the right thing and change the name." (Via C-SPAN)

Snyder and team management were dealt quite the blow to their pocketbooks last week when the U.S. Patent and Trademark Office canceled Redskins trademarks calling them "disparaging." (Via CNN)

And if the USPTO finds it "disparaging," it's highly likely many others do, too. Now, the media is responding and it might just be the driving factor behind getting the name changed.

In a memo obtained by JimRomenesko.com, The Detroit News is reportedly banning the usage of Redskins in its stories.

The memo reads, "The Detroit News will no longer use the team’s nickname, “Redskins,” in routine football coverage, reflecting the growing view that the term is offensive to many Americans. ... For our platforms, use Washington football team on first reference, except Washington (alone) is acceptable if the reference to the NFL team is clear."

Michael Taube for The Washington Times says he backs the Redskins' name, but if it must be changed, he suggests the "Washington Reagans" — after late U.S. President Ronald Reagan.

"It would be the ultimate tribute to Ronald Reagan. Many Americans, and the vast majority of conservatives, would applaud this decision. ... Mr. Snyder is a well-known Republican in NFL circles. ... Only a conservative would ever honor Reagan’s legacy with this type of tribute, and Mr. Snyder appears perfectly suited to do it.

That idea was joked about at first, but Taube's article is getting quite the buzz. (Via Gawker | Newsmax | Mediaite)

And other publications have gotten in on lobbying for a name change as well.

Washington City Paper promoted the use of the "Washington Pigskins" as recently as 2012. The shortened 'Skins would still work.

USA Today has even gotten in on the 'what if?' game, albeit half-heartedly, by posting this name generator to their website. They probably won't make the cut, but likely neither will David Letterman's proposal. (Via CBS / "Late Show With David Letterman")

But, one name that's really gotten attention from many is the "Washington Warriors." In a Huffington Post - YouGov poll, the name got 55% of the vote. The team's logo and color scheme would likely still work with that name.

The pressure is mounting on Dan Snyder more and more each day and now with no trademark protection likely burning a hole in his pockets, can Snyder really afford to "never" change the Redskins name? (Via NBC)