How The Brady Bill Changed The Discussion Around Gun Reform 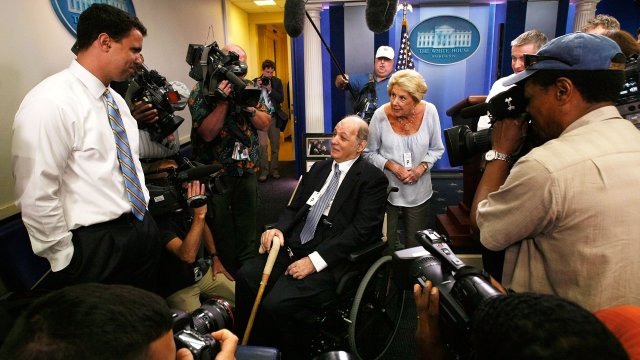 SMS
How The Brady Bill Changed The Discussion Around Gun Reform

Some of 2018's deadliest shootings have a commonality: The gunmen who carried out those killings got their weapons legally.

After shootings like the one in Parkland, Florida, some of the media coverage centered around background checks — a system that has likely prevented millions of firearms from falling into the wrong hands but also let some soon-to-be criminals slip through the cracks.

To better understand this system, let's go back to the beginning.

The current background check system stems from the assassination attempt on President Ronald Reagan in 1981. In that attempt, a gunman shot and wounded four people — including President Reagan and his press secretary James Brady.

Brady was shot in the head and partially paralyzed for the rest of his life. But the shooting motivated him and his wife, Sarah, to fight for gun reform through their organization, the Brady Campaign.

"The assassination attempt on Ronald Reagan was really, for a lot of different reasons, a defining moment in our nation's history, and certainly for the cause of gun violence prevention. … But it really was a wakeup call in our nation, about the accessibility of guns."

Kris Brown is the co-president of the Brady Campaign.

"What we are witnessing today is more than a bill signing. It's the end of unchecked madness and the commencement of a heartful crusade for a safer and saner country."

President Bill Clinton signed the Brady Handgun Violence Prevention Act, or the Brady Bill, in 1993. It mandated a five-day waiting period for firearm purchases and led to the creation of the National Instant Criminal Background Check System, or NICS, five years later.

Since then, there have been more than 3 million denials through background checks. But that system has its blind spots.

Then there are instances like in Charleston, S.C. Although Dylann Roof had been arrested for a drug charge, which is a prohibitive factor for buying a firearm, he was still able to purchase one by exploiting a loophole.

The FBI has three days to deny a purchase. If that time expires, the sale can go through, which is what happened with Roof.

He went on to shoot and kill nine people at a black church in S.C. in 2015 using a gun he purchased legally.

"It's the best system that we have in this country to ensure the dangerous individuals don't have easy access to guns. Like any system, it needs to be improved over time."

And most Americans agree with that sentiment. A Quinnipiac poll published in early 2018 found that 97 percent of Americans are in favor of universal background checks — which would cover all sales of firearms.

But that's not all. The Brady Campaign has also called for a ban on assault weapons and large capacity magazines, and the enactment of extreme risk laws, which could keep at-risk people from accessing guns. The thinking here is that there isn't just one solution to curb gun violence.

"The issue of gun violence in America is one that is an epidemic. And when you're looking at an epidemic from a medical, behavioral science aspect, you don't say 'Which of these 10 solutions that potentially eliminates the epidemic should we choose and forgo the rest?' You attack it in every way. And so we need to attack this problem in a multi-faceted approach."