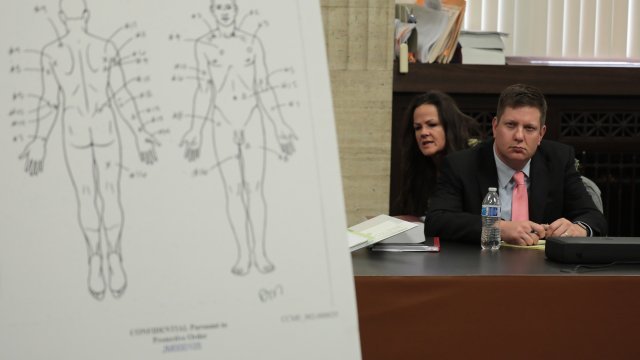 Throughout the Jason Van Dyke murder trial, the defense team has called several witnesses to recount past encounters with Laquan McDonald — police officers and staff who had altercations with Laquan during his time in Chicago's juvenile detention facility.

Van Dyke, a Chicago police officer, shot and killed Laquan back in 2014. Dash cam footage of the shooting sparked nationwide protests and led to Van Dyke being charged with first degree murder.

Testimonies like the ones being given in Van Dyke's defense are called "Lynch material," and while some view them as offensive or irrelevant, they are perfectly legal because of an Illinois Supreme Court case from more than 30 years ago.

"State v. Lynch was a 1984 Supreme Court of Illinois case that said if there's a valid claim of self defense, the defendant can put on evidence of the prior violent acts or acts of aggression by the person who is the victim," Alexa Van Brunt said.

Alexa Van Brunt is a civil rights attorney in Chicago and a Northwestern law professor.

The original case also surrounded a murder trial. The defendant, Paul Lynch, shot and killed Lester Howard and claimed he'd done it in self defense. Because there were conflicting stories about who was the aggressor during the altercation, the Illinois Supreme Court let the defense introduce evidence pertaining to Howard's past. Howard had three prior convictions for battery, and Lynch was ultimately acquitted.

The problem here, at least in Van Brunt's opinion, is the dash cam video of the Laquan McDonald shooting shows what happened before, during and after the incident. The idea behind Lynch material is to provide some testimony when there are "conflicting stories."

"The interesting thing about Lynch, though, is it was decided in '84, a less technological age than the current one. There was no video the judge actually said, or the court actually said, in that case, that, you know, this is not a case where the jury can see what the defendants saw. … Well, ironic to apply it, then, to this case, where in fact they can see that what Van Dyke saw either through the dash cam video or the recreation that the defense suggested was the true version of events."

Despite the dash cam video, Judge Vincent Gaughan, who's presiding over the Van Dyke trial, has allowed these witnesses to testify on behalf of the defense.

The decision has drawn criticism from Laquan's family, lawyers following the trial and some members of the media.

"I mean, will they use it for the reason they're supposed to, which is evaluating the reasonableness of his actions? Or will they say that, 'You know what, this kid was dangerous, and maybe it's good we got him off the streets.' And that's horrific, and a really, really negative view of criminal justice," Van Brunt said.

The Jason Van Dyke murder trial is currently in its third week of testimony. Analysts expect the jury to start deliberating within the next couple of weeks.