How Exoplanets Rebooted NASA's Search For Life Beyond Earth 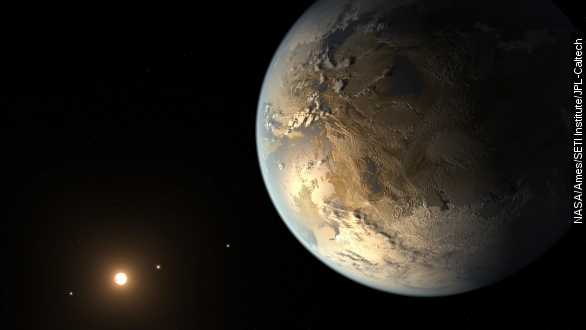 SMS
How Exoplanets Rebooted NASA's Search For Life Beyond Earth

By Evan Thomas
April 26, 2015
NASA is putting together an unprecedented team of scientists and researchers to analyze recently found exoplanets for the potential to support life.
SHOW TRANSCRIPT

The Nexus for Exoplanet System Science, or NExSS, brings together scientists from three different NASA research centers, the SETI Institute and teams at 10 different universities.

The nonprofit SETI Institute is keeping up the search, using independently funded tools such as the Allen Telescope Array.

But NASA's new NExSS initiative is focused more on life than intelligent life, using verifiable scientific data from a relatively new field: the study of exoplanets, which orbit stars other than our own. (Video via NASA)

The first definitive detection of a pair of exoplanets came in 1992. Researchers found evidence of the first exoplanet orbiting a G-type star, like our own sun, three years later.

The Kepler mission launched in March of 2009 and really opened the floodgates. Since it started scanning distant stars, researchers have compiled a list of more than 1,000 confirmed exoplanets, plus thousands of additional candidates.

In fact, some research based on gravity data now indicates there's at least one exoplanet for each star in the Milky Way. Researchers found "stars are orbited by planets as a rule, rather than the exception."

But the mere presence of a planet doesn't mean much. Finding Earth-like life on another planet would require that planet orbit within its star's habitable zone, a certain set of distances at which water on the surface is a liquid.

There are a number of other variables to consider as well, which is where the brain trust at NExSS comes in. The goal is to develop a sort of equation to evaluate a given exoplanet for the possibility of life: a way to learn about and classify its formation, interior, geology, atmosphere, tidal dynamics, ecosystem and the effects of its host star.

Jim Green, NASA’s Director of Planetary Science, says this "provides a synthesized approach in the search for planets with the greatest potential for signs of life. The hunt for exoplanets is not only a priority for astronomers, it’s of keen interest to planetary and climate scientists as well."

And NASA will keep NExSS well-stocked with data to sift through. Missions over the next decade are expected to lengthen our list of exoplanets. The earliest dedicated mission, the Transiting Exoplanet Survey Satellite, is set to launch in 2017.

This video includes images from NASA and music by Blazo / CC BY NC SA 3.0.