How Climate Change Is Impacting Surfing 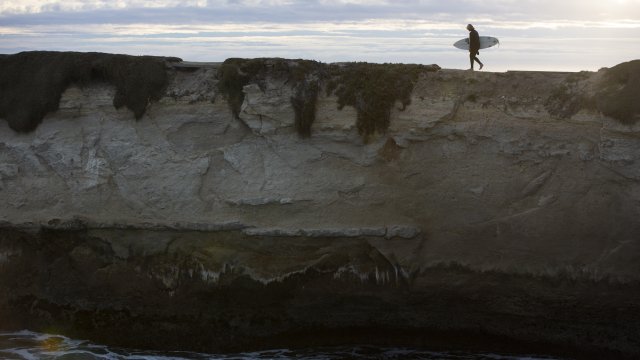 For professional surfer Shaun Burns, faces in the lineup aren't the only thing he notices when paddling out at his local surf break in Santa Cruz, California.

"As surfers, you know, we're kind of the stewards of the ocean," Burns said. "We're able to see firsthand the changes that climate change is having on the ocean."

Like generations of surfers before him, Burns has built his life around observing and understanding the coastal environments that make his passion possible — a way of life that he says is increasingly being altered by climate change.

"I don't know if there's an exact moment," Burns said. "I think just growing up and seeing the cliffs around here eroding day by day and just understanding that just one simple rock change or one part of the cliff that breaks can change a wave."

The effects are taking form, from the erosion of the cliffs that help shape the breaks along Steamer Lane to the shifting of seasons that bring swells to the California coast.

"Winter generally starts later now and ends earlier, so there's less of a window to surf around here," Burns said.

He says the very waves he and so many others carve across in Monterey Bay are changing, and not in the way they should.

"I do believe that waves can go extinct," Burns said. "These days with less rain and less sediment being deposited into the ocean through river mouths and just less storms bringing sand in here to Cowells, there's not as much of a sandbar anymore. So, there's less potential and opportunity for kids to you know, gently get their feet wet into the mellow waves of Cowells and have the opportunity to start surfing."

The surf community in Santa Cruz isn't alone in noticing alarming shifts in how waves are breaking. Dr. Dan Reineman, a surfer and scientist with California State University Channel Islands, has studied the relationship between coastal resources and coastal societies over the course of his career, with particular attention being paid to the impact of rising sea levels.

"No doubt in my mind that sea level rise is going to have really significant impacts on coastal systems and in particular, on surf breaks in the decades to come," Dr. Reineman said. "Surfing is a very personal sport. Different surfers like different kinds of waves. A good way for one surfer might not be the best way for a beginner, and a good wave for a long border is not necessarily the same as a good wave for a short border."

In 2017, Dr. Reineman conducted a study that surveyed just over 1,000 surfers from 105 surf spots in California on their present-day preferences for surfing. Using this data, Dr. Reineman and his team were able to infer what rising sea levels as a result of climate change meant for the survival of the waves the surfers liked by the year 2100.

"The outlook was — is — not great," Dr. Reineman said. "Something like a third of the surf spots that we had data for in California are not likely to survive providing surfers the kinds of conditions that they like today."

According to the study, 16% of the surf spots evaluated are in danger of what's called drowning, meaning the waves won't break anymore, and 18% are threatened but could adapt if natural systems of the shorelines aren't disturbed. Meanwhile, 5% could see a rise in optimal surfing conditions with rising sea levels.

"Some waves break on fixed features, right?" Dr. Reineman said. "A shelf of hard-rock reef, and that shelf, that hard rock will change very slowly over time, and sea levels might simply rise past it, and then that wave won't really break anymore. It'll drown, essentially. In other places, if there's a wave that breaks over a sandy bottom and the sand supply is intact, you know, you might see that wave more capable of adapting into the future, but it really depends on the local conditions at each place."

One of the largest factors that determines what comes next for surf spots such as Ventura is the willingness and speed with which communities react.

"It's only been really in the last decade that there have been efforts to protect waves as important sort of cultural recreational resources," Dr. Reineman said. "Surfers Point in Ventura, California, is a really marvelous example of what a community can do to look ahead and come up with a solution that will work with the coast itself, and maybe better position that stretch of coast and that community to deal with climate change."

"It's really hard to make an argument to say remove parking spaces and put in dunes," Dr. Reineman said. "That equation doesn't always get solved in favor of dunes. If we don't make smart choices as coastal communities, we might make decisions and protect certain parts of our society at the expense of other things. We'll really see a complete loss of beaches, and the only people that will be left to enjoy that coastline are the folks with big oceanfront homes that have been fortified against the rising seas."

As a result, Dr. Reineman says it is crucial that surfers speak out about the changes they are witnessing if steps are going to be taken to preserve breaks and the waves they generate, and many surfers agree.

Nik Strong-Cvetich is the chief executive officer of Save the Waves Coalition, a nonprofit that teams with surfers and different organizations to care for and defend surf ecosystems around the world.

The coalition carries out this work through preservation programs as well as through an app that allows surfers to flag concerns they have at their local breaks.

"We have a really unique perspective because we're in the water day in and day out," Strong-Cvetich said. "We literally schedule our lives around tides and conditions. If low tide is what we need for waves to break and all of a sudden we have permanent high tide with sea level rise, we have a big problem, like an existential problem."

Strong-Cvetich says the team's goal is protecting 1,000 surf ecosystems by 2030 by making it clear to local governments just how important these areas are.

"I think that's the struggle with climate change, even though the implications are massive, it's still abstract for many people," Strong-Cvetich said. "I think when you can break it down to how it impacts people's lives on a daily basis, that's where change is going to start, and we don't have a lot of time."

Economics is helping sell the importance of these surf breaks.

"We've done a number of studies where we presented our work to decision makers or to elected officials, and sort of when you have no number, it's valued default at $0," Strong-Cveitch said. "Surf actually drives a huge part of the economy. It drives jobs, it drives housing prices, it drives tours and revenues."

According to a 2017 report, professors from the U.K. and Australia estimate the "worldwide value of good surfing waves" to be around $50 billion per year — a massive economic asset Strong-Cvetich says is undeniably worth maintaining.

"We maintain skate parks and soccer fields and baseball fields and volleyball nets and all those things for recreation and other sports and other Olympic sports, but with surfing, we really don't maintain the coastal ecosystems that make the sport possible," Strong-Cvetich said. "I think with climate change, we have to start thinking about that because if we adapt without thinking about our recreational assets, all of a sudden, we've thrown them away for no reason because we decided to build a seawall on top of them or a port or, or some other part of, you know, armoring and adaptation that may be unnecessary or poorly planned because they didn't have the whole economic picture."

For Burns, who has teamed up with Save the Waves coalition, the pressure is on to make sure the waves at his local break and others are preserved for generations to come.

"Surfers haven't had much of a voice in the past," Burns said. "I think Save the Waves has given surfers a voice here locally in Santa Cruz and then also all around the world to just voice their concerns about the waves and ocean quality and you know, surf ecosystems. I want to make sure those kids have the opportunity that I did when I was younger: to have waves to surf and an opportunity to become a professional surfer."