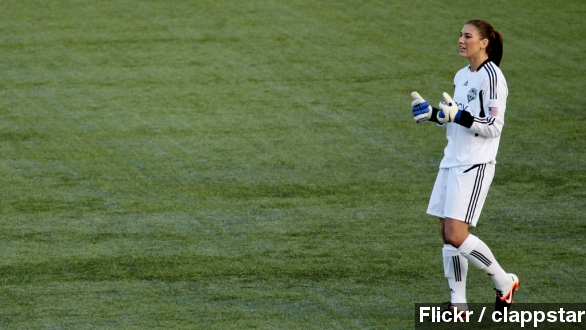 Soccer star Hope Solo has been arrested for domestic assault after allegedly hitting her sister and 17-year old nephew.

The goalkeeper for the U.S. women's national soccer team was arrested at a suburban Seattle house party early Saturday morning. (Via Nike)

A police statement obtained by The Seattle Times says Solo appeared to be "intoxicated and upset" when police arrived. The statement also said police observed visible injuries on Solo's sister and nephew, and determined Solo was the primary aggressor from speaking to those at the scene.

Time says Solo is being held without bail on charges of fourth-degree assault at the South Correctional Entity Regional Jail.

New York Post received a statement form U.S. Soccer saying, "We are aware of the situation. At this point, we don't have any further comment."

Seattle Reign FC, the team Solo currently plays for, tweeted "We are aware of the situation with Hope and are now gathering information. We do not have any additional information to share at this time." (Via Twitter / Seattle Region FC)

This isn't the first time Solo has been involved in a domestic violence incident.

But he was never charged and the two were married just hours later. (Via Wikimedia Commons / Johnmaxmena)

Solo will have her first court appearance on Monday.