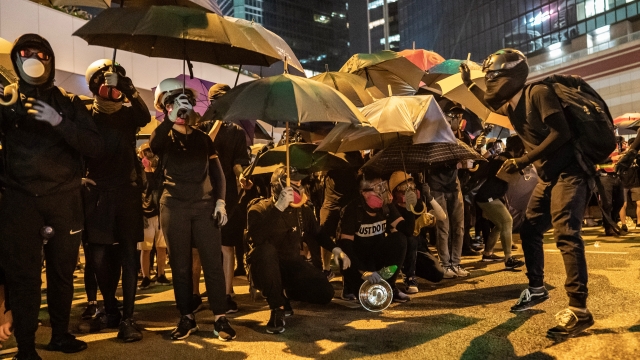 SMS
Hong Kong Protests Continue For 17th Straight Week
By Alec Larson
By Alec Larson
September 29, 2019
​Demonstrations on Saturday began peacefully, but were cut short after violence broke out between protesters and the police.
SHOW TRANSCRIPT

Pro-democracy demonstrations in Hong Kong turned violent over the weekend as protests continued for the 17th straight week.

Tens of thousands of protesters turned out on Saturday to commemorate the fifth anniversary of the "Umbrella" pro-democracy movement, which triggered a months-long occupation of Hong Kong. The movement sought full democracy for the city instead of the Beijing government preselecting candidates for Hong Kong's chief executive. The demonstrations ultimately ended with no government concessions.

The demonstrations began peacefully, but were cut short after violence broke out between protesters and the police. Some protesters reportedly threw bricks and gas bombs at government buildings. Police fired tear gas and unleashed water cannon blasts of blue-tinted water at suspected violent protesters.

The violence continued into Sunday, with clashes between police and protesters spilling into three of Hong Kong's major districts. According to the New York Times, the Hong Kong government said that 13 people had been hospitalized with injuries, including one woman in "serious condition."

In a key demand, protesters are seeking an independent investigation into alleged brutality by Hong Kong police. So far, Hong Kong's leader Carrie Lam has resisted a formal probe, insisting that existing mechanisms for handling police complaints are enough.

Hong Kong now braces for a potential major protest mobilization for Tuesday's 70th anniversary of the founding of the People's Republic of China. Police have already banned a march that day. But protesters have promised a mass action, threatening international embarrassment for Beijing.

When asked about the police violence on Sunday, Hong Kong pro-democracy lawmaker Eddie Chu Hoi-Dick addressed the situation. He said: "I think it just shows that the government is so afraid of the people that they even tried to stop us from walking. In the past few weeks they allowed us to start the rally until we finish it. [unintelligible] rehearsal for what will happen on 1st of October.”