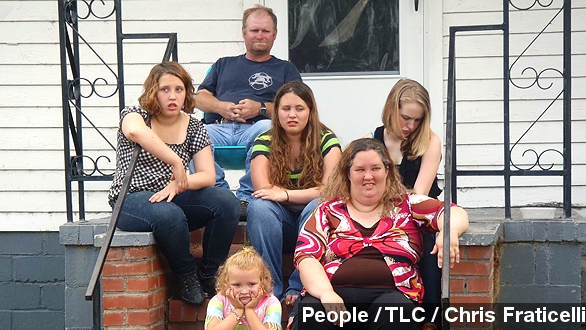 By Jasmine Bailey
January 7, 2014
All but one of the members of the "Here Comes Honey Boo Boo" family were hurt in a car crash Monday night.
SHOW TRANSCRIPT

Including little Alana Thompson a.k.a. Honey Boo Boo. Multiple sources report Mama June, Pumpkin and Jessica, or Chubbs, were all also in the SUV that Sugar Bear was allegedly driving. (Via TLC)

Reports say the accident occurred after a truck ran a red light and blindsided the family's SUV. (Via Variety)

TMZ reports Honey Boo Boo's sister Pumpkin has severe chest bruises and is having panic attacks, Mama June has a back and neck sprain, the father Sugar Bear has a back contusion and Honey Boo Boo hit her head on a passenger window and has a headache. (Via Facebook / "Here Comes Honey Boo Boo")

Mama June told TMZ, "an ambulance showed up, but ...  the EMTs were going to take them to a hospital they didn't like so they went to another hospital in an SUV drrven (sic) by their bodyguard."

She was also quoted saying they only had the "suburban for 6 months and it's not even paid off yet." The third season of "Here Comes Honey Boo Boo" is set to premiere on TLC Jan. 16.