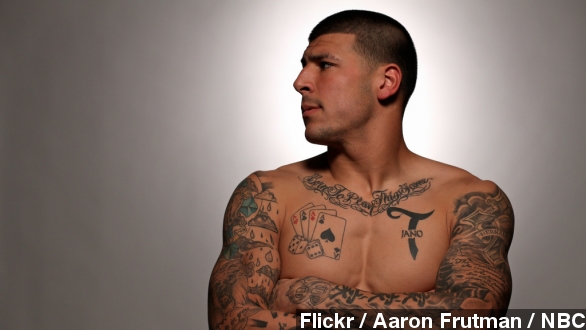 By Matt Moreno
May 21, 2014
Suffolk County prosecutors are looking to speak with a tattoo artist or artists who inked Hernandez's right forearm.
SHOW TRANSCRIPT

Authorities believe Aaron Hernandez's tattoos could somehow uncover answers about murders the ex-NFL star will be charged with next week.

"​Prosecutors are asking for help from tattoo artists who may have inked Hernandez's right arm between February 2012 and June 2013." (Via NECN)

The authorities are referring to a tattoo or tattoos on Hernandez's right forearm and a possible connection to a 2012 drive-by-shooting murder in Boston's south end. (Via Flickr / Aaron Frutman / NBC)

Hernandez will be arraigned on murder charges related to the deaths of two men in that case. (Via The Boston Globe)

Authorities wouldn't describe Hernandez's right-forearm tattoos or what kind of information they seek about them. And they say the tattoo artist or artists aren't suspects in the case — they're more like witnesses. But Boston station WHDH points out they might be tough to track down.

"During that time, Hernandez bounced around quite a bit — traveling from California to Connecticut, throughout south Florida and other parts and into Boston, Massachusetts, and Rhode Island as well."

In a separate case, Hernandez is also being charged with the murder of semi-pro football player Odin Lloyd. Lloyd's body was found in a North Attleborough industrial park in June of 2013. (Via ABC)

The ex-Patriots tight end will be arraigned May 28 on charges related to the 2012 drive-by shooting.