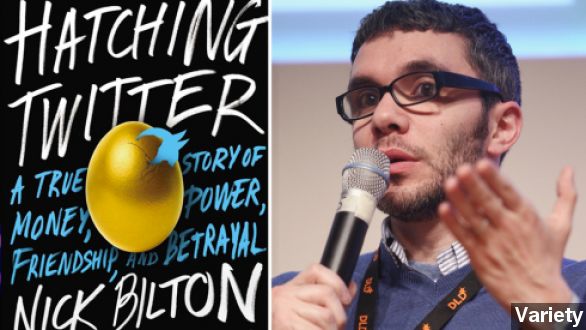 New York Times columnist Nick Bilton's book "Hatching Twitter" has been talked about a lot since its November release. There was even talk about it becoming a movie.

But the behind-the-scenes origin story is likely coming to TV as a series instead. Bilton will pen the pilot and continue to serve as the series' producer. AllThingsD writer Mike Isaac isn't surprised.

"The narrative reads like a serialized drama, a chaotic ride of infighting among a set of flawed founders who stumbled upon the idea for one of the biggest social media networks of the past 20 years."

Variety reports it's Lionsgate who's optioned the rights to Bilton's Twitter tale.

Which Pocket-lint notes is a popular practice in Hollywood because it's cheaper than buying the screenplay — and likely means in this case, there's an exclusive agreement that would kill the project if Bilton doesn't get it done for Lionsgate.

GigaOM notes we've seen stories take this path before: A New York Times column spins into a book, which gets adapted into a TV series.

Lionsgate is the studio behind the huge hit "Orange Is The New Black," by the way. (Via Netflix)

​Add to that Lionsgate's producer pick for the Twitter series. Allison Shearmur also produced "The Hunger Games," so the odds are ever in her favor and stuff.

TechCrunch interviewed some of the people featured in the book. The takeaway? "It was fairly accurate. Some folks told us that it was ‘highly’ dramatized in some instances. ... And it probably makes for better TV that way."

A writer for The Hollywood Reporter says the book "sheds light on the relationships, battles, power grabs and betrayals along the way." Let's hope it consistently translates to TV.

The deal's financial terms have not been made public.