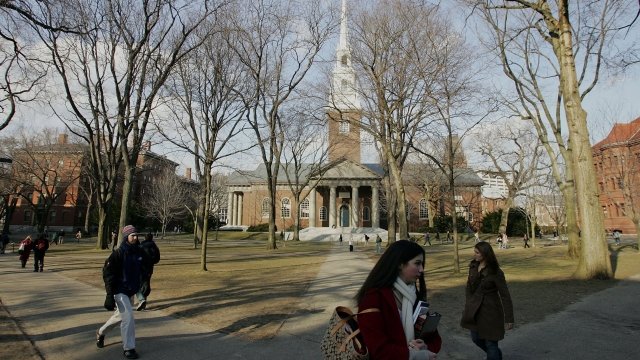 SMS
Sororities, Fraternities Sue Harvard Over Single-Gender Club Rule
By Ahmed Jawadi
By Ahmed Jawadi
December 3, 2018
The groups suing the school argue its "sanctions policy" discriminates against them on the basis of their gender.
SHOW TRANSCRIPT

A group of sororities, fraternities and three current students filed federal and state lawsuits Monday. Both suits allege the Ivy League school's "sanctions policy" discriminates against and punishes students on the basis of their gender.

The sororities also argue the policy unfairly punished women's social clubs. Harvard created the policy in response to a report on sexism and sexual assault, which the university linked to men-only clubs. But due to the new rules, the suit says, nearly every women's social club was either forced to shut down or become a co-ed organization.

The groups allege Harvard's rules have deterred students from joining women's organizations and sororities. They're seeking damages for what they allege the sanctions cost them, as well as court orders to force the university to get rid of the sanctions.

Harvard formally stopped recognizing single-gender social clubs more than three decades ago, but some of the groups were able to still operate off campus. Harvard had yet to comment as of Monday afternoon.