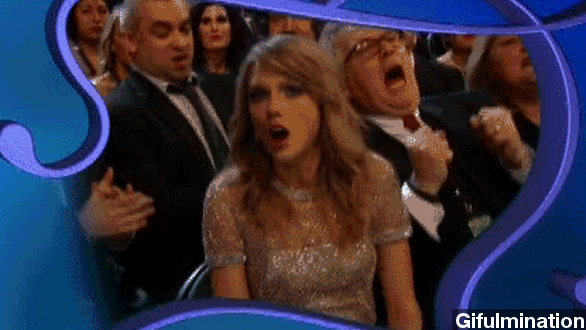 By Danny Matteson
January 27, 2014
Taylor Swift had an awkward moment at the Grammys on Sunday. Check out some other uncomfortable losses from past award shows.
SHOW TRANSCRIPT

​It normally comes after months or years of hard work — an actor or musician waiting to hear their name called at an awards show — and when they don’t hear it, things can get a little awkward.

Case in point? Taylor Swift at this year's Grammys. She apparently thought she was taking home album of the year, but she was a little quick on the trigger. (Via Wikimedia Commons / Taylor Swift Gallery)

See that flinch from Taylor and her entourage? Our guess is that "r" sound at the beginning of Daft Punk's "Random Access Memories", which won, sounded a lot like the one at the beginning of Taylor’s album "Red." Thus, the confusion. (via Gifulmination)

Taylor was a good sport though and gave the Daft Punk boys a round of applause. Which is more than we can say for some past losers, like Faith Hill at the 2006 Country Music Awards.

Presenter: “And the award for Female Vocalist of the Year goes to … Carrie Underwood.”

Yeah. Not happy. And neither was Samuel Jackson when he lost the Oscar for best supporting actor to Martin Landau in 1995.

Presenter: “And the Oscar goes to … Martin Landau in Ed Wood.” (Via Academy of Motion Picture Arts and Sciences)

​Sam is definitely mouthing something there. Our guess? Probably "Good Job!" (Via Academy of Motion Picture Arts and Sciences)

Then there are some awards show losers who don't need words to convey their emotions. Yahoo has a list of some of the best Oscar loser faces —

Even the typically stone-faced James Earl Jones, had a look of utter disbelief when lost at the 2012 Tony Awards. (Via Tony Award Productions)

And, of course, no awards show sore loser list would be complete without Kanye West.

As Complex points out, he made his first big splash back in 2006, when, after losing the award for best video at the MTV Europe Video Music Awards, he took to the stage and let loose with this tirade:

“This video cost a million dollars! I had Pam Anderson, I’m jumpin across canyons... If I don’t win, the award show loses credibility.” (Via MTV Europe)

And he reprised his stage-crasher role at MTV’s 2009 Video Music Awards in the U.S. — infamously telling Taylor Swift: (Via NBC / 'Today')

And, finally, as Elton John shows us, you don’t even have to be a loser to be sore at an awards show.

According to The Hollywood Reporter, after winning the award for classic songwriter at the 2004 Q Awards, he had this less-than-kid-friendly message for Madonna — who was nominated but didn’t win best live act.