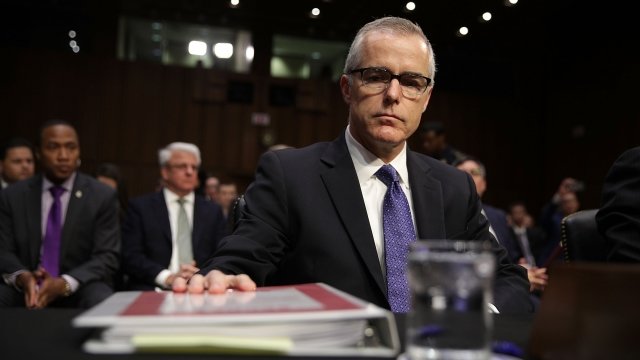 By Katherine Biek
September 7, 2018
Once a grand jury is impaneled, it can be used to subpoena documents and get key figures to testify under oath if there's any evidence of a crime.
SHOW TRANSCRIPT

A new report indicates the investigation into former FBI Deputy Director Andrew McCabe is ramping up.

The Washington Post reported Thursday that prosecutors have impaneled a grand jury.

Once a grand jury is impaneled, it can be used to subpoena documents and get key figures to testify under oath if there's any evidence of a crime. Grand juries are also the only ones who can issue indictments.

Of course, none of this means McCabe will be charged with a crime. But it is a significant step in legal proceedings.

McCabe's lawyer confirmed to the Post that federal prosecutors had taken this procedural step "more than a month ago." He called the leak "a sad and poorly veiled attempt to try to distract the American public."

McCabe's lawyer said he believes his client will not be charged with any crime. The U.S. attorney's office refused to comment on the Post's report.