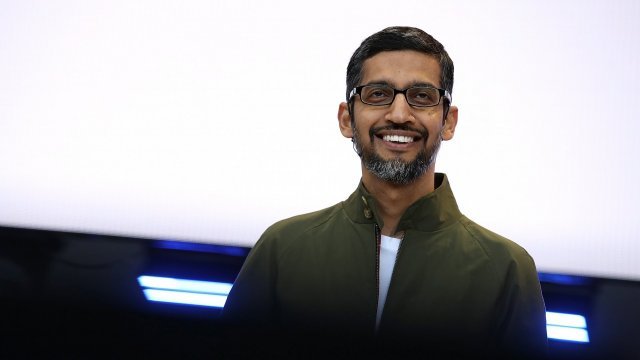 SMS
Google's CEO Set To Testify On Capitol Hill
By Audrey Esther
By Audrey Esther
November 28, 2018
House Republicans will get to ask Google's top executive about the company's business practices and more during a public hearing next week.
SHOW TRANSCRIPT

Google's CEO is set to finally appear before Congress.

On December 5, Sundar Pichai will testify publicly before the House Judiciary Committee. The committee says the hearing will examine the tech giant's "potential bias and the need for greater transparency regarding" its "filtering practices."

House Majority Leader Kevin McCarthy reportedly requested the hearing. In a statement, he said the company's business practices "may have been affected by political bias."

In September, after answering questions from House Republicans during a private meeting, Pichai agreed to answer their questions publicly at the upcoming hearing.

Also in September, Google refused to let Pichai testify before the Senate Intelligence Committee about the impact of foreign social media use on U.S. politics. Instead the company submitted written testimony from a top executive, which angered senators.

Next week it's likely Pichai will also face questions from lawmakers about Google's user privacy policies and business dealings with China.

This will be the fourth hearing the House Judiciary Committee has held about social media filtering practices.