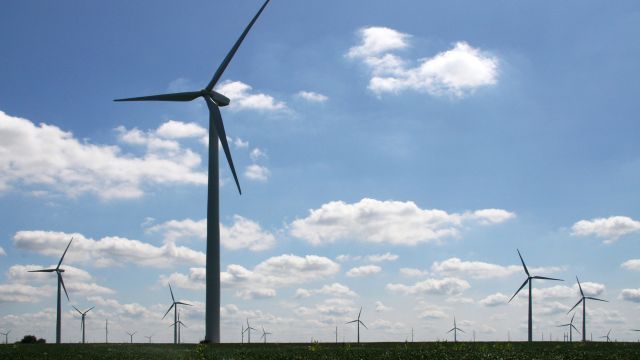 SMS
Google Sets Goal To Be 100 Percent Green By 2017
By Matt Picht
By Matt Picht
December 6, 2016
The company plans to buy enough green energy to cover 100 percent of its global operations.
SHOW TRANSCRIPT

By this time next year, Google hopes to be 100 percent green.

The internet giant says it plans to pay for enough renewable energy to power all of its data centers and offices around the globe by 2017.

SEE MORE: Google's Search Results May Have A Liberal Bias

Google calls itself the "largest corporate buyer" of green energy in the world. The company is currently buying up 2.6 gigawatts — or just over two DeLoreans — of renewable power.

The facilities will still be hooked up to the regular power grid, so there's no way for Google to guarantee the power they're running on comes from renewable sources. But the company says it will purchase enough renewable energy credits to pump as much green energy into the grid as it takes in.

It's also made a point of supporting renewable energy projects that it thinks will continue to grow the green energy sector.

The environment isn't the only thing pushing Google away from conventional energy sources. The company notes prices for renewable energy have plummeted over the past six years.

Plenty of other tech companies have also pledged to achieve 100 percent reliance on green energy. Even some small towns rely almost entirely on renewable energy.