Golden Globe Noms: Everything You Need To Know 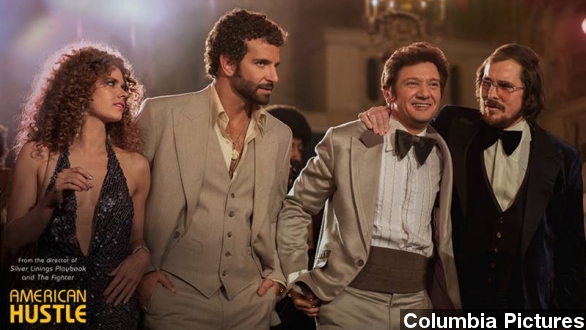 SMS
Golden Globe Noms: Everything You Need To Know

By Lauren Zima
December 12, 2013
The Golden Globes nominees were announced Thursday, and "12 Years a Slave" and "American Hustle" are in the lead. But some of the categories don't mak
SHOW TRANSCRIPT

Golden Globe nominations are out, and surprise, surprise — "12 Years A Slave" is the top dog. Well, one of two.

The critically acclaimed film, also dubbed one of the hardest movies to watch in years, scored seven nominations. (Via Fox Searchlight)

But right there with it is "American Hustle," also with seven noms. That movie's been praised by critics, but hasn't hit theaters yet, and the noms should give it a boost at the box office. (Via Columbia)

Other high earners were "Gravity" and "Captain Phillips," with four nominations each.

For Best Motion Picture, Comedy or Musical, "American Hustle," "Her," "Inside Llewyn Davis," "Nebraska" and "The Wolf of Wall Street." (Via Paramount Pictures)

The nominees in that group should raise a few eyebrows. "American Hustle," and "The Wolf of Wall Street" haven't necessarily been touted as comedies. Like, at all, really.

Look, we're not saying it's the end all/be all, but right there -- IMDb. Drama. And you've seen the trailers!

"All of the potential nominees for best comedy. None of them are a comedy." (Via ABC)

Studios strategically decide categories for their movies, though the Hollywood Foreign Press Association, which runs the show, can weigh in. And choices have raised questions and garnered criticism in the past.

Perhaps most infamously, when "The Tourist" got a Best Picture nod after getting widely panned. Many argued Sony had buttered up the HFPA members, who are behind the show. (Via Columbia, FlavorWire)

And the Globes can be powerful tools for movies at the box office, though Variety notes — they're no longer considered Oscars indicators.

Since the Academy moved up its ceremony, the Globes are now held after Oscar voting is closed, meaning Globes nominees don't stick in voters' heads as much.

The Globes honor TV too, and there a few notable snubs on that snide.

No nomination for Claire Danes, who won last year for Showtime's "Homeland." No love for Mandy Patinkin either.

A rising star though, is Fox newcomer series "Brooklyn Nine-Nine." It scored a nomination for Best TV Series, Comedy, and leading man Andy Samberg got nominated.

And on the drama side, "Breaking Bad" scored nods, and could win big after its series finale. (Via AMC)

The Globes nominee announcements come on the heels of the Screen Actors Guild Award nominees, announced Wednesday. You can find links to both full lists in our transcript.