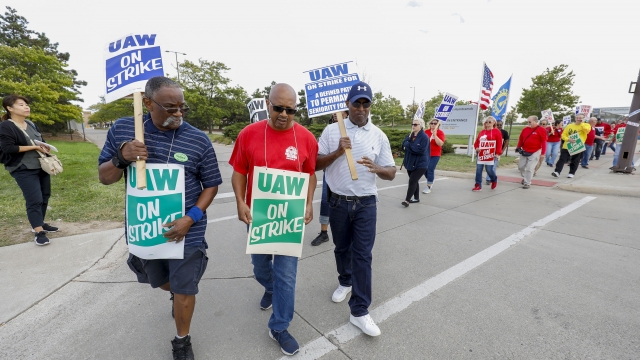 Ongoing talks between General Motors and the United Auto Workers union hit a snag on Tuesday. It's just the latest hold-up in negotiations aimed at ending a national UAW strike.

In a letter to union members on the 23rd day of the strike, UAW Vice President Terry Dittes said a lack of job security commitment by GM had become a major sticking point in negotiations. He said fears over job security were rooted in the company's auto production in foreign countries.

Dittes wrote: "We have made it clear that there is no job security for us when GM products are made in other countries for the purpose of selling them here in the U.S.A. We believe that the vehicles GM sells here should be built here. We don’t understand GM's opposition to this proposition."

The strike began on Sept. 16, with nearly 50,000 UAW members looking for higher wages, health care protections and pensions. A number of GM's U.S. factories have been forced to shut down, and the company's reportedly lost over $1 billion so far.

The UAW said Sunday that talks for a new four-year labor contract had "taken a turn for the worse" after GM rejected UAW's most recent proposal and replied with an offer that had already been turned down.

The strike is reportedly the largest work stoppage at a U.S. business since 2007.