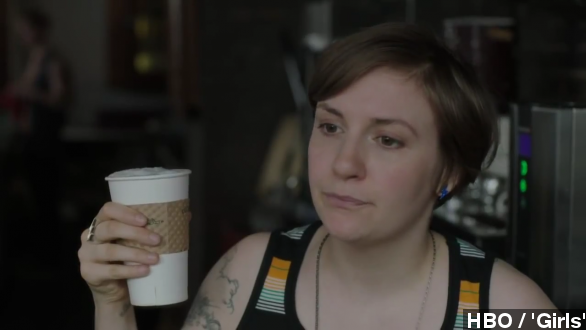 By Briana Koeneman
January 10, 2014
If you don't like the nudity on HBO's comedy-drama "Girls," that's your problem, the show's producers said Thursday.
SHOW TRANSCRIPT

If you don't like the nudity on HBO's comedy-drama "Girls," the show's producers said Thursday that's your problem.

During a panel at the Television Critics Association press tour, a reporter apparently asked creator, producer and star Lena Dunham why the show's seemingly random nude scenes are necessary. (Via HBO / "Girls")

According to Entertainment Weekly, the exact wording of the question was: "I don't get the purpose of all the nudity on the show — by [Dunham] particularly. I feel like I'm walking into a trap where you go, 'Nobody complains about all the nudity on Game of Thrones,' but I get why they do it. They do it to be salacious and titillate people. And your character is often nude at random times for no reason."

And Dunham and "Girls"' two other producers didn't hold back in their responses.

And Dunham added: "It's a realistic expression of what it's like to be alive, I think, and I totally get it. If you're not into me, that's your problem, and you're going to have to kind of work that out with whatever professionals you've hired." (Via Los Angeles Times)

But producer Judd Apatow fired back: "Do you have a girlfriend? Does she like you? Let's see how she likes you when you quote that with your question, just write the whole question as you stated it." (Via TBS / "Conan")

Wow. And the heat on the reporter didn't cool off even after the discussion had moved on to other topics.

Konner later interrupted Dunham's answer to another question and said: "I literally was spacing out because I'm in such a rage spiral about that guy. I was just looking at him ... and going into this rage [over] this idea that you would ... accuse a woman of showing her body too much. The idea of it just makes me sort of sick." (Via The Huffington Post)

But she told NBC afterward that she was embarrassed by her comments. "I'm usually not like that, but I can't believe he would speak to a woman like that."

Despite all the drama, "Girls" was renewed for a fourth season by the end of the panel. The third season premieres on HBO Sunday.