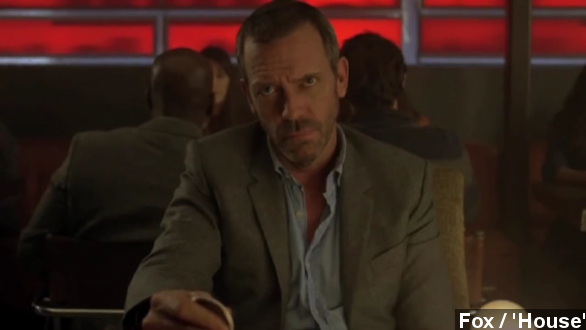 By Briana Koeneman
February 7, 2014
Sure, Fox's medical drama "House" may have gone off the air in 2012, but Dr. Gregory House is apparently still helping save lives in Germany.
SHOW TRANSCRIPT

Sure, Fox's medical drama "House" may have gone off the air in 2012, but Dr. Gregory House is apparently still helping save lives.

A doctor in Germany says the show helped him find the right diagnosis for a heart failure patient whose symptoms had baffled others for months. (Via Fox / "House")

According to the Toronto Star, the 55-year-old man went from doctor to doctor for a year, but none of them could figure out why he was going deaf, blind and suffering from extreme heart failure.

NDTV reports it wasn't until the man was referred to Dr. Juergen Schaefer, who's known in his homeland as the "German Dr. House," that he was finally given a diagnosis.

According to The New York Times, Schaefer is a huge fan of the show and uses it to teach medical students about diagnosing strange diseases.

But it was one episode in particular that helped Schaefer figure out what was wrong with his new patient.

The Independent says the man's symptoms were almost identical to one of the fictional patients in the last season of the show. Dr. House diagnosed her with cobalt poisoning from a faulty hip replacement.

And it turns out, that's exactly what was ailing Schaefer's own patient. He says he was able to pinpoint the man's diagnosis in about five minutes because of that episode.

Once he was sure of the diagnosis, Schaefer replaced the man's hip. His heart condition got better and his other symptoms started to improve almost immediately after the surgery. (Via YouTube / UnikosmosChannel)

Schaefer's experience was published in the journal Lancet Friday.