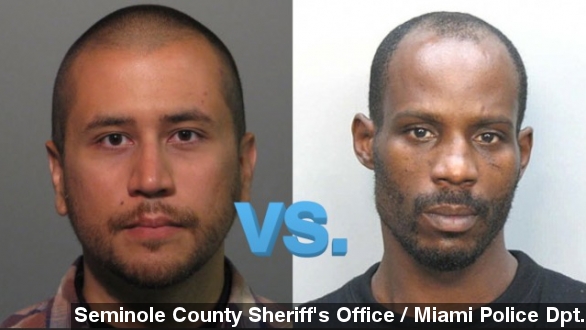 George Zimmerman is back in the headlines. This time, it's because he's reportedly agreed to box rapper DMX.

TMZ broke the news, saying DMX was chosen out of 15,000 applicants who wanted to fight Zimmerman. The site later reported contract negotiations are still being sorted out with the rapper.

The two will reportedly duke it out for three rounds in an Internet pay-per-view-only telecast.

Surprisingly, Zimmerman tells Radar Online the "celebrity" boxing match was his idea. "Boxing isn't new to me. It's something I had picked up well before the incident and it's something that I liked, I enjoyed, and I kept up with it."

That "incident" Zimmerman is referring to is the death of 17-year-old Trayvon Martin. Zimmerman admitted to shooting and killing Martin in February 2012 but was acquitted of murder and manslaughter charges. (Via ABC)

The event's promoter, Damon Feldman, apologized for news of the match-up dropping Tuesday night, a day before Trayvon's Feb. 5 birthday, telling Philadelphia Magazine: "I didn't know when his birthday was. I just wanted to get the news out there. ... I'm sorry if I hurt anybody’s feelings."

Feldman told Philly Mag the fight will take place March 15, but the event's location won't be revealed until a press conference next week. Still, don't expect DMX to go easy on Zimmerman.

The announcement drew mixed reactions on Twitter, with some calling it "disrespectful" while others called a fight against Zimmerman must-watch stuff. (Via Twitter)

Zimmerman says part of the proceeds from the fight will go to an animal rescue charity.