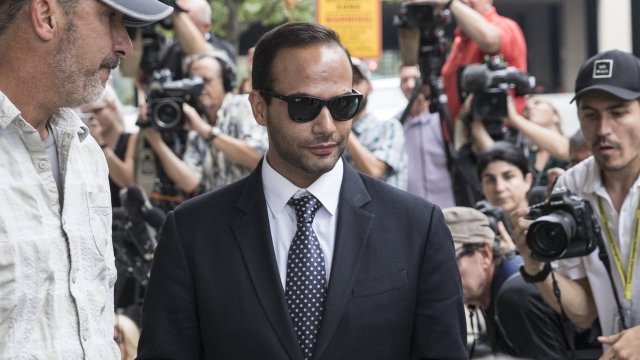 By Katherine Biek
November 26, 2018
He was sentenced to 14 days in prison after pleading guilty to lying to the FBI about his contacts with people connected to the Russian government.
SHOW TRANSCRIPT

Former Trump campaign aide George Papadopoulos is going to prison Monday — despite his repeated attempts to avoid it.

Papadopoulos was sentenced to 14 days in prison back in September after he pleaded guilty in 2017 to lying to the FBI about his contacts with people connected to the Russian government.

Papadopoulos' lawyers had asked a federal judge twice this month to postpone the start of his sentence until an appeals court rules on a case challenging the appointment of special counsel Robert Mueller.

But the judge denied both of those requests Sunday, saying Papadopoulos "has only his own delay to blame" since he failed to to appeal his conviction or prison sentence during the time allotted.

The judge also pointed out that other judges in lower courts have determined Mueller's appointment "was lawful" and that Papadopoulos failed to demonstrate that the appeals court will likely come to a different decision.

Papadopoulos is the first member of Donald Trump's 2016 presidential campaign to be sentenced as part of Mueller's Russia investigation.