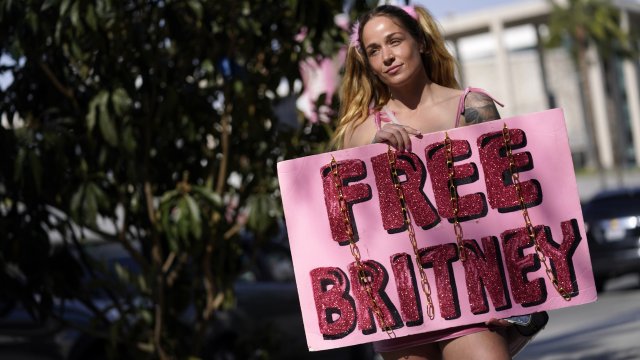 "Free Britney" is the rallying cry for fans and advocates of Britney Spears.

Grant Rutter, host of the Grant Rants Hollywood Talk podcast: "On April 22, 2019, I was one of the first people to get to the Britney Spears rally, I guess you could say."

#FreeBritney supporter Junior Olivas: "I was a part of the very first one, there was literally a handful of us. I was so nervous. I was like 'they're gonna literally think I'm crazy.'"

Rutter: "These are people who actually care about her.'"

The pop star has been under a strict conservatorship since 2008 after concerns were raised about her mental and physical well being. The conservatorship restricts Spears' ability to make her own business deals, medical decisions and even see her sons.

#FreeBritney supporter Gibson Erchul:  "That's one of the things that I think hits me the most is just that her motherhood has just been ripped away."

And so the "Free Britney" movement was born as a small group of concerned fans.

#FreeBritney supporter Megan Radford: "Free Britney was first mentioned on the internet, I would say, in 2009 — shortly after Britney's conservatorship became permanent. I made a homemade t-shirt that said 'Free Britney' that I staged at a little mini protest."

The movement soon grew and went viral on social media — propelled by podcasts like "Britney's Gram," worried comments on the pop star's Instagram posts and concerned videos on TikTok.

Radford: "The first time that it started going mainstream a little bit was in July 2020 when it kind of exploded on TikTok I was like, 'Oh my gosh, we're getting so much momentum.' And then 'Framing Britney Spears' just launched us into a whole different world."

Erchul:  "Sometimes we'll have parades that go through my campus, and I'll take the tapestry out and I'll hold it in front of people just to get the word out."

The pop star's father Jamie Spears has called the "Free Britney" movement a "joke" made up of "conspiracy theorists," but that hasn't stopped other high-profile celebrities — like Miley Cyrus, Paris Hilton and Sarah Jessica Parker — from lending their support.

Schell: "It feels good that people are recognizing that this is a messed up situation."

Rutter: "I definitely think the public pressure and the Free Brittany movement of it all has shuffled the deck."

Spear's conservatorship is still heavily shrouded in mandatory secrecy. Spears has said in a court filing that it "rescued her from a collapse," but in a court record obtained by The New York Times, an investigator also wrote: "She articulated she feels the conservatorship has become an oppressive and controlling tool against her."

Now, the pop star is fighting to remove her father from having a say in controlling her fortune, estimated at nearly $60 million, and possibly going as far as terminating the system entirely. On June 23, she's speaking for the first time in two years in front of a judge.

Radford: "I hope that we're giving her courage to say what she wants to say."

Rutter: "Only she knows what her reality is. So I hope that she presents herself in the best way. And I hope that what she wants for herself and what is best happens for her."