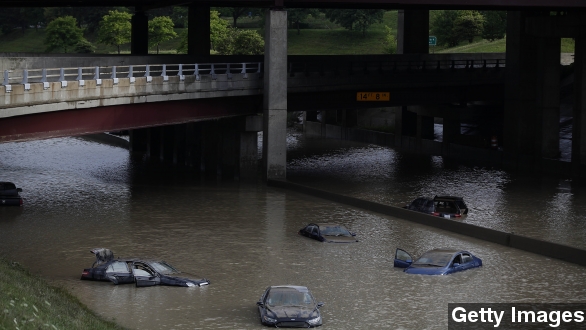 By Briana Koeneman
August 13, 2014
Storms and flash flooding brought a month's worth of rainfall to some parts of the East Coast in a matter of just a few hours.
SHOW TRANSCRIPT

Heavy rain and flash floods wreaked havoc Wednesday morning on the East Coast, where some places saw a month's worth of rain in just a few hours.

​NBC: "The water came down 5 inches in Islip, New York, came down in one hour. Yesterday in Maryland, we ended up with about 10.5 inches of rain in a 24-hour period. That's enough rain for two month's worth."

As you can see from this radar map a meteorologist for The Weather Channel posted to Twitter, the nasty storm system stretches from Washington, D.C., to New York.

And according to The Weather Channel, the New York area and southern Connecticut were among the hardest hit, with reports of more than 10 inches of rainfall in some towns. It definitely sounds like a lot.

But this video taken by WNBC's SkyCam above the Southern State Parkway in Long Island says it all — you can see more than a dozen abandoned cars swallowed by water as the rain continues to fall.

The National Weather Service dubbed the torrential downpours a "dangerous and life-threatening" situation, and the media outlets in the area seem to agree.

No injuries have been reported, but emergency responders in boats were dispatched to several areas to rescue drivers trapped on flooded roads. (Video via MSNBC)

The massive flooding also caused power outages throughout the storm's path, and there were several reports of downed trees and road closures to boot. (Video via WBFF)

​ABC: "When the water started coming in and it started flooding my bed and everything else, I knew we were in trouble."

Even sinkholes are becoming a serious problem thanks to the heavy rain — a woman was hospitalized after her car fell into a massive sinkhole that opened up in a Pennsylvania parking lot. (Video via WPXI)

Some relief might not be too far off — forecasters predict the rain should move out of the region by midday Wednesday. But another round of storms is possible in the evening.