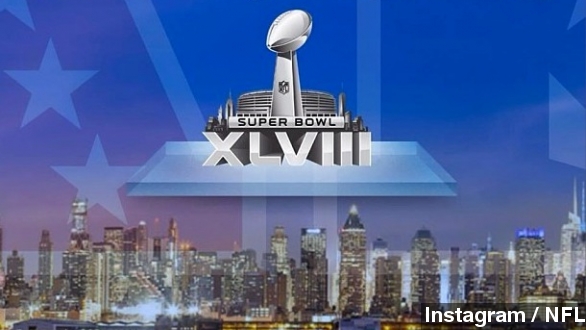 By Matt Moreno
January 15, 2014
Fox will use infrared cameras to show players' body heat during the Super Bowl. New technology showing the wind in detail will also be unveiled.
SHOW TRANSCRIPT

Super Bowl ​XLVIII is going to be one of the coldest Super Bowls ever, so Fox plans to use some never-before-seen ways of bringing the game to viewers.

Fox, the network broadcasting the game, is installing new, infrared cameras to detect players' body heat throughout the game. (Via The Hollywood Reporter)

"Hopefully there will be some body heat out there to measure because it's potentially going to be very cold."

"Which could affect the game, right?"

"Outdoor game. First of it's kind in this Super Bowl era." (Via WBNS)

That infrared camera view will turn players into looking like this — showing the hottest and coldest parts of their body. (Via National Geographic)

In addition to that, Fox will also use new equipment to see how the swirling winds of New York will affect quarterbacks and kickers. Though, the network hasn't released exactly what kind of technology it plans to use to measure this. (Via Sports Illustrated)

Fox will reportedly test out the infrared technology during the Seahawks-49ers game this Sunday. But, that could be the last Sunday NFL game of the season.

Multiple outlets report Fox and league officials are contemplating a Super Bowl Saturday or Super Bowl Monday depending on the weather. Fox Sports president Eric Shanks told a Television Critics Association panel Monday, "The game can be played on Monday ... We can try to get the game in on Saturday if there’s a hundred year, three-day storm coming Sunday.” (Via The Wrap)

While HitFix quotes Shanks as saying, ​ "I think [the decision] will be made as late as possible but still try to give enough people enough time to plan."

The Super Bowl is currently scheduled for Sunday, February 2nd in the outdoor MetLife Stadium — home of the New York Giants. But, it will likely take more than just cold weather to delay Super Bowl Sunday.

The Packers and 49ers NFC Wild Card game went on as scheduled earlier this month in Green Bay where temperatures sat around 3 degrees Fahrenheit with a wind chill around -15. (Via Mashable)