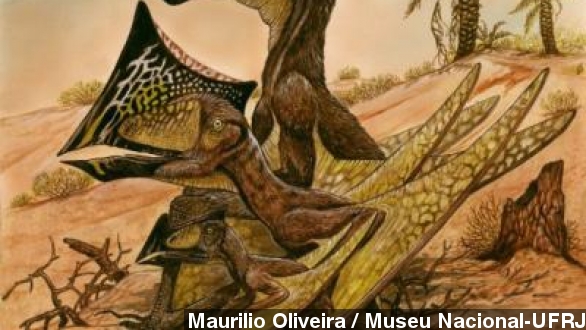 By Sebastian Martinez
August 14, 2014
Newly found fossils reveal a previously unknown species of flying reptile with a really weird head, which some say looks like a butterfly.
SHOW TRANSCRIPT

New research has shed light on a remarkable species of extinct flying reptile with an extraordinary piece of headgear.

The species is called Caiuajara dobruskii and was discovered in southern Brazil near the border with Paraguay.

LiveScience reports the fossils were originally found by a father-son duo in the 1970s, but "The find was forgotten for decades, and then rediscovered just two years ago."

The new species was a pterosaur — an extinct group of flying reptiles which also contains the famous pterodactyl that lived alongside dinosaurs. (Video via National Geographic)

Although it's Caiuajara's elaborate crest that has made headlines, it belongs to a family with similar distinctive features.

"The bizarre looking Tapejara" Caiuajara belonged to the family Tapejaridae, many of which had distinctive crests, some of which rival Caiuajara's for colorfulness and size. (Video via BBC)

Just take pterosaurs like Thalassodromeus, with its large sail-like crest, or Nyctosaurus, which had a more mast-like crest. But what purpose did they serve?

The American Museum of Natural History explains the crests, which developed in later species, may have served to help pterosaurs recognize their own species, cool their bodies, steer during flight or even attract potential mates.

But scientists say the crux of the study is the number of fossils found in one place.

A paleontologist told National Geographic the find was "unprecedented" and "The discovery offers the 'best evidence ever uncovered' that the extinct dinosaur-era animals ... may have lived in colonies."

Scientists say the find is also significant because it contained individuals from different stages of their life, which allowed them to chart the animal and its crest's development.