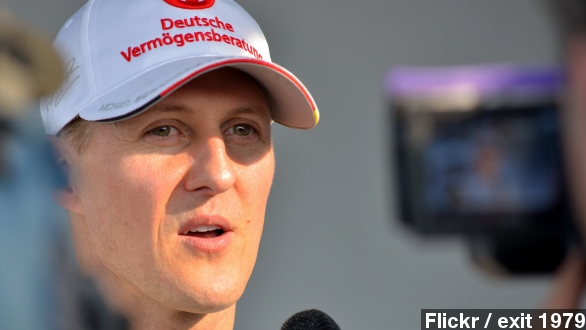 By Sebastian Martinez
June 16, 2014
The driver is out of the hospital after coming out of a medically induced coma, though exact details of his condition are still unclear.
SHOW TRANSCRIPT

Formula One legend Michael Schumacher is out of the hospital, almost six months after a skiing accident nearly took his life.

The 45-year-old was in a medically induced coma at the Grenoble University Hospital after suffering a head injury while skiing in the French alps in late December.

While we do know Schumacher is no longer in a coma, family members have done their best to keep the seven-time Formula One World Champion's recovery as private as possible, and a lot of questions about his condition remain.

Multiple outlets are now reporting Schumacher has been taken to a hospital in Lausanne, Switzerland, so he can begin rehabilitation closer to his home in Gland.

Widely regarded as one of the greatest Formula One racers of all time, Schumacher's injury rocked the racing world, and news about his condition in the last month has been grim.

A retired Formula One doctor wrote on his blog that this far into his recovery, Schumacher's chances were slim, writing, "I’m quite afraid (and virtually certain) we will never have any good news about Michael."

Then, last week, German magazine Bunte reported Schumacher had been moved out of intensive care, but his chances of a full recovery had diminished. (Via Bunte)

Now, with Schumacher set to begin rehabilitation, his family say they are sure the outpouring of support from fans has helped in his recovery.