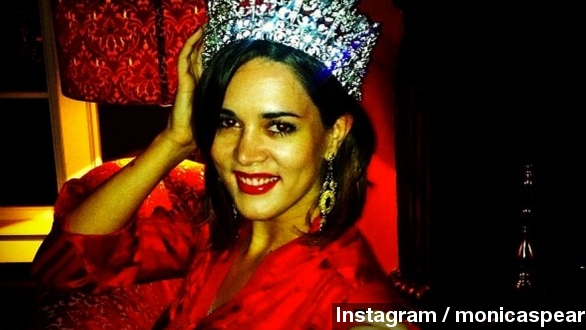 By Christian Bryant
January 7, 2014
2004's Miss Venezuela Monica Spear and her ex-husband were shot dead on a highway in Venezuela in what authorities call an attempted robbery.
SHOW TRANSCRIPT

Former Miss Venezuela and actress Monica Spear was shot dead in Venezuela along with her ex-husband late Monday in what authorities are calling an attempted armed robbery.

The 29-year-old Spear, her 39-year-old ex-husband Thomas Berry and their five-year-old daughter Maya were reportedly stranded on the side of the road near Puerto Cabello following a small car accident. (Via Daily Mail)

According to local police, that's when armed attackers approached the car. When they couldn't get in, the attackers opened fire, killing both Spear and Berry and injuring their small daughter. (Via Venevision)

"Her little daughter Maya, who is only five years old, was shot in her leg. ... She will have a scar forever, not only in her leg but in her heart." (Via CNN)

The former beauty queen was a University of Central Florida graduate who became a TV actress, most recently appearing in a soap opera on Telemundo.

Venezuela's President Nicolas Maduro condemned the attack Tuesday, saying "It is very sad to hear of the loss of this young woman … It is a problem of social violence." (Via The Guardian)

That widespread social violence is something of an epidemic, according to a report by the U.S. State Department.

The report calls Venezuela's capital city Caracas "notorious for the brazenness of high-profile violent crimes--murder, robbery, and kidnappings--committed in neighborhoods across the city, at all hours of the day and night."

The Huffington Post reports Spear even moved from her native Venezuela to Miami because of security concerns for herself and her daughter. Police are still investigating the attack.